There is little in the way of preface that could adequately frame the spectacle. Though for some, Debbie Harry’s “self sacrifice” apparently seemed a horrifying endorsement of sexual violence. As J. J. Anisiobi explains: 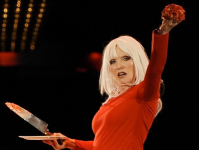 Dressed in a floor-length red dress and with her trademark blonde hair Debbie took centre stage at the Museum Of Contemporary Art Gala and both shocked and disgusted attendees.

As the 66-year-old singer stood with all eyes on her, two life-size nude statues of herself and co-curator Marina Abramovic were rolled onto the stage.

With almost magician-like precision Harry produced a large machete and as the crowd of celebrities began to cheer she plunged the knife straight into the heart of her naked double.

Some members of the MoCA audience chanted, “Violence against women!” in protest of the the faux brutality. One person in attendance described the show as “appalling”. Perhaps most damning, Dita von Teese, who has made a career out of exploiting female sexuality, invoked the famous comic strip Pogo, tweeting that, “This must be art, because it sure ain’t entertainment”.

And while it is certainly easy enough to understand the prudish horror some felt watching the Blondie vocalist sacrifice and dismember herself, one might also reasonably wonder whether there is anything such as context left in human communication. Heaven forbid a legendary punk goddess should do something remotely outlandish. Who would ever expect that?

Perhaps we might also criticize Elton John, then, for his homophobia. After all, what possible reason could the generational pop star have for wearing such … well … queer costumes? He must be mocking gay men and their fashion choices, right? Right?

Then again, perhaps Harry’s velvet-cake butchery really was art with no entertainment value; indeed, the entertainment comes as other people desperately scramble to justify their self-aggrandizing prudery.