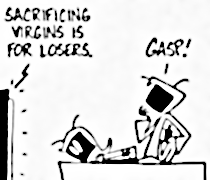 This public service announcement is brought to you by Adam Huber.

There are, of course, so many things we might say.

Not that any of them are good or useful.

Do we go with the cigarette joke, or the … er … yeah, you know, never mind.

There is little in the way of preface that could adequately frame the spectacle. Though for some, Debbie Harry’s “self sacrifice” apparently seemed a horrifying endorsement of sexual violence. As J. J. Anisiobi explains:

Dressed in a floor-length red dress and with her trademark blonde hair Debbie took centre stage at the Museum Of Contemporary Art Gala and both shocked and disgusted attendees.

As the 66-year-old singer stood with all eyes on her, two life-size nude statues of herself and co-curator Marina Abramovic were rolled onto the stage.

With almost magician-like precision Harry produced a large machete and as the crowd of celebrities began to cheer she plunged the knife straight into the heart of her naked double.

Some members of the MoCA audience chanted, “Violence against women!” in protest of the the faux brutality. One person in attendance described the show as “appalling”. Perhaps most damning, Dita von Teese, who has made a career out of exploiting female sexuality, invoked the famous comic strip Pogo, tweeting that, “This must be art, because it sure ain’t entertainment”.