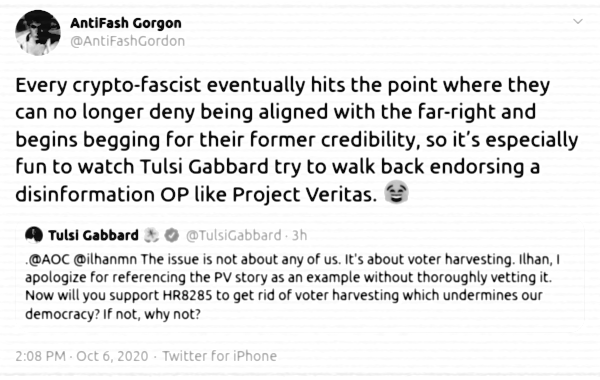 There are reasons why I don’t believe in omens:

Every crypto-fascist eventually hits the point where they can no longer deny being aligned with the far-right and begins begging for their former credibility, so it’s especially fun to watch Tulsi Gabbard try to walk back endorsing a disinformation OP like Project Veritas.

Still, though, sure, whatever. What did I miss?

Sure, there’s a story, here.

Ahead of the November election, the representative expressed serious concern over states that are legally allowed to practice ballot harvesting—a practice that allows third parties to collect and deliver people’s ballots in some parts of America. The EFPA would ensure that ballots are handled by election officials and mail carriers, and in certain cases, family members, household members, or caregivers.

Although her original motivations for passing a bill that would mitigate fraud before a massively important election seemed well-intentioned, nothing can ever remain that simple with this politician. Yesterday, in a move that’s already brought much backlash and concern, Gabbard tied herself to the right-wing group Project Veritas, which is currently targeting ballot harvesting and Ilhan Omar.

“Project Veritas offers further evidence of the need to ban ballot harvesting. It’s not a partisan issue. It’s been abused to help both R & D candidates, including in North Carolina & California. Please help by telling your congressional rep to pass our bipartisan bill HR8285,” Gabbard tweeted following a smear campaign that Veritas released.

In the history of Democrats reaching across the aisle, it is hard to recall when cozying up to the conservative propagandists with a criminal reputation has ever really worked:

Earlier this month, [Gabbard] introduced legislation to ban so-called ballot harvesting nationwide. What’s that? It’s when a third party gathers ballots for people to deliver to the appropriate election officials. There are various legal restrictions on the practice in individual states, but especially right now, this seems like something we should be supporting, given that the President is trying to destroy the post office during the most important election of our lifetimes that just happens to be going on during a pandemic.

But no, Gabbard seems to be of the Republican mindset when it comes to voting, in that she doesn’t want people to be able to do it easily. There’s no better proof for this than Gabbard’s subsequent endorsement of an “investigation” into ballot harvesting by Project Veritas that targeted Minnesota Rep. Ilhan Omar and other Somali representatives.

Project Veritas is a right-wing group that uses misleading editing and staged “sting” operations to create videos to promote conservative fear-mongering. They’ve gone after ACORN and Planned Parenthood, and now, they’re joining Donald Trump and the rest of the GOP in transparently racist attacks on Ilhan Omar and other Muslim and Black politicians.

Their latest “exposé” is about the fake issue of ballot harvesting and claims to expose Omar and others by showing “Minneapolis resident Liban Mohamed, the brother of Minneapolis City Council member Jamal Osman, claiming he received money to collect 300 absentee ballots in a single day for his brother’s special election race in Minneapolis’ Sixth Ward last month.” The hit job also contains allegations that Ilhan Omar engaged in ballot harvesting for her primary last month.

Then again, it’s probably not really about reaching across the aisle. Tulsi Gabbard is one of those who seemingly cannot fail to behave in dubiously sketchy manner. It’s one thing for fans hoping to stick it to the Democratic Party, but, really, that cannot possibly be her raison d’être.

No, really, whose life ambition is to be an icon of doubt and mistrust?

@AntiFashGordon. “Every crypto-fascist eventually hits the point where they can no longer deny being aligned with the far-right and begins begging for their former credibility, so it’s especially fun to watch Tulsi Gabbard try to walk back endorsing a disinformation OP like Project Veritas.” Twitter. 6 October 2020.