Then again, the idea of an American Catholic disdaining what the Pope has to say isn’t exactly news.

Still, as we read through the explanation of what the Florida Republican is on about from Lauren French and Seung Min Kim of Politico—

Sen. Marco Rubio, a Catholic, criticized Pope Francis on Wednesday after the pontiff played a key role in helping the United States and Cuba forge an agreement that resulted in the release of American Alan Gross from Cuba.

Rubio said he would “ask His Holiness to take up the cause of freedom and democracy.”

The Florida Republican said he didn’t criticize Francis’ personal appeals to help facilitate Gross’ release, but was speaking in response to the White House’s announcement about talks to normalize relations with Cuba after a nearly 50-year embargo with the country.

—it seems nearly inevitable to wonder if Sen. Rubio is up for his job chairing the Senate Foreign Relations Subcommittee on Western Affairs. What, after all, is his objection?

Steve Benen of msnbc tried to tackle that question.

Among all critics, few have been as vocal and visible today as Sen. Marco Rubio (R-Fla.), who’s been apoplectic about the administration’s breakthrough. That’s not unexpected, though the far-right senator’s complaints seem deeply flawed and poorly thought out. 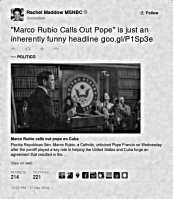 In an official written statement, for example, the Florida Republican called the White House’s shift “inexplicable

“While business interests seeking to line their pockets, aided by the editorial page of The New York Times, have begun a significant campaign to paper over the facts about the regime in Havana, the reality is clear.”

It almost sounds as if Rubio thinks “business interests” – in this case, farmers and Rubio’s allies at the U.S. Chamber of Commerce – should accept limits on free enterprise, even as other countries trade with an American neighbor. Doesn’t the senator usually see “business interests” as “job creators”?

“But most importantly, the regime’s brutal treatment of the Cuban people has continued unabated. Dissidents are harassed, imprisoned and even killed. Access to information is restricted and controlled by the regime.”

Right, and that’s after 54 years of the exact same U.S. policy. How more decades of a failed policy would Rubio recommend to improve the conditions of the Cuban people? Isn’t it at least possible that Cubans will benefit better relations and expanded opportunities with the United States?

Look, this is not difficult. The Pope’s job, regardless of how well any one of us thinks he is doing it, is to foster compassionate outcomes in human society. Mr. Rubio’s job is to help govern the United States correctly and efficiently. One of these men is doing his job. The other is a U.S. Senator dreaming of his name in the White House.

Sadly, that isn’t the whole of Benen’s critique because that isn’t all the Florida freshman said. But there is only so much utility in reviewing the incoherence here, save for an awful paragraph via Sahil Kapur of Talking Points Memo DC:

“My understanding is that the influence that His Holiness had was on the release of Mr. [Alan] Gross, which I’ve not criticized. As I said, I’m happy that he’s with the Cuban people [sic]. I would also ask His Holiness to take up the cause of freedom and democracy, which is critical for a free people — for a people to truly be free,” Rubio, a Catholic whose parents immigrated from Cuba to flee an oppressive regime, told reporters.

Right. He is a United States Senator.

The Widsom of Marco: Freedom is critical for a free people to truly be free.

In unrelated news, mathematicians today announced that mathematics are critical for strong math to be truly mathematical.

Marco Rubio might be “happy” that Pope Francis is “with the Cuban people”, but it might also be difficult to establish any sort of agreement about what that actually means.

What would President Rubio do? Eff it all and invade? Do nothing because after all this time the embargo’s gotta work? You know, like the odd home run from some hitter you never heard of except the guy next to you at the pub says, “He was due”? No, seriously, what is the range of options, here? A breakdancing contest outside a Havana rec center with liberation on the line?