“guess how many people are working on Iranian nuclear proliferation at the State Department? as of today....zero”

We should be clear that by today, the columnist means Friday last, when she posted the tweet, which refers, in turn, to a report from Foreign Policy:

One of the State Department’s top experts on nuclear proliferation resigned this week after President Donald Trump announced the U.S. withdrawal from the Iran nuclear deal, in what officials and analysts say is part of a worrying brain drain from public service generally over the past 18 months.

Richard Johnson, a career civil servant who served as acting assistant coordinator in State’s Office of Iran Nuclear Implementation, had been involved in talks with countries that sought to salvage the deal in recent weeks, including Britain, France, and Germany — an effort that ultimately failed.

Johnson’s departure leaves a growing void in the State Department’s stable of experts on Iran’s nuclear program and highlights a broader problem of high-level departures from government.

Officials say the trend is particularly evident at the State Department, where Trump sidelined career diplomats and morale plummeted under former Secretary of State Rex Tillerson. The office Johnson led has gone from seven full-time staffers to none since Trump’s inauguration.

Today is Tuesday, and elsewhere in the commentariat Steve Benen notes, “The article didn’t explicitly say that Johnson resigned in protest, but there doesn’t appear to be much of a mystery about what happened here.”

END_OF_DOCUMENT_TOKEN_TO_BE_REPLACED 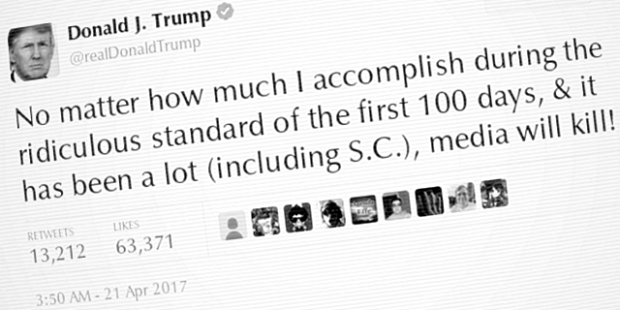 Perhaps Pramuk and Schoen come across as, well, disbelieving and perhaps a bit tacit:

Donald Trump just called using his first 100 days in office to judge him a “ridiculous standard,” but he repeatedly boasted about what he would achieve in that exact time frame before he took office.

And, no, that isn’t so much, but that’s also just the lede. The remaining five paragraphs seem to presume something everybody ought to be in on, some vital tacitry. And this is President Donald Trump, so, yes, yes there is indeed some vital tacitry afoot.

END_OF_DOCUMENT_TOKEN_TO_BE_REPLACED

Roll Call brings us up to speed:

Rumors that Trump is considering Bolton as Secretary of State prompted Paul to write an op-ed in Rare.us, calling Bolton “part of failed elite that Trump vowed to oppose” ....

.... Paul said no man “is more out of touch” with the Middle East than Bolton and that Bolton is unable to see the mistakes he has made.

“All nuance is lost on the man,” Paul wrote. “The fact that Russia has had a base in Syria for 50 years doesn’t deter Bolton from calling for all out, no holds barred war in Syria. For Bolton, only a hot-blooded war to create democracy across the globe is demanded.”

This is one of those interesting things Republicans do to themselves. The Kentucky also-ran is not without a point, but he’s also Rand Paul, and this is Donald Trump’s Republican Party, now. There really isn’t anything surprising happening, which is a strange thing considering it’s happening at all. Still, though, as Donald Trump continues to undermine pretty much every allegedly respectable reason anyone might have offered in defense of their vote, we should remember that it always was about supremacism and lulz.

END_OF_DOCUMENT_TOKEN_TO_BE_REPLACED

I could not be more proud to announce Randy Berry as the first-ever Special Envoy for the Human Rights of LGBT Persons.

We looked far and wide to find the right American official for this important assignment. Randy’s a leader. He’s a motivator. But most importantly for this effort, he’s got vision. Wherever he’s served – from Nepal to New Zealand, from Uganda to Bangladesh, from Egypt to South Africa, and most recently as Consul General in Amsterdam – Randy has excelled. He’s a voice of clarity and conviction on human rights. And I’m confident that Randy’s leadership as our new Special Envoy will significantly advance efforts underway to move towards a world free from violence and discrimination against LGBT persons.

Too often, in too many countries, LGBT persons are threatened, jailed, and prosecuted because of who they are or who they love. Too many governments have proposed or enacted laws that aim to curb freedom of expression, association, religion, and peaceful protest. More than 75 countries still criminalize consensual same-sex activity.

At the same time, and often with our help, governments and other institutions, including those representing all religions, are taking steps to reaffirm the universal human rights of all persons, regardless of sexual orientation or gender identity. So while this fight is not yet won, this is no time to get discouraged. It’s time to stay active. It’s time to assert the equality and dignity of all persons, no matter their sexual orientation or gender identity. And with Randy helping to lead our efforts, I am confident that’s exactly what we can and will do.

Not all the news coming out of the Beltway is bad.

Sometimes there isn’t a joke to make. That is, we can’t even say the secret is out because it never really was a secret. Rather, it is a quiet gratification within the spectrum of grim news coming at us from all sides, and once again Americans are sort of late to the party:

Secretary of State John Kerry is a distinguished diplomat with impeccable manners — but that doesn’t mean he’s above lobbing a well-placed insult when it comes to enemies of the United States.

Kerry made clear earlier this week that he is committed to referring to the Islamic State as “Daesh,” a name that the group considers so degrading that it has threatened to kill anyone under Islamic State rule who uses it. The Islamic State’s opponents in the Muslim world have already embraced the name.

So, to the one, yes, as Akbar Shahid Ahmed explains for Huffington Post, them’s fightin’ words. Which is why others have dispensed with the whole ISIS/ISIL question. That is to say, really, this isn’t quite the same as when the Tea Party referred to themselves as “teabaggers”, but there is a similar aspect insofar as Daa’ish has apparently done this to themselves.

“Daesh” is an acronym for the Arabic phrase meaning the “Islamic State in Iraq and Syria” (though the last word can also be translated as “Damascus” or “Levant”), and it is thought to offend the extremist group because it sounds similar to an Arabic word for crushing something underfoot.

Daesh in Arabic “sounds like something monstrous. … It’s a way of stigmatizing [the Islamic State], making it something ugly,” Joseph Bahout, a visiting scholar at the Carnegie Endowment for International Peace, told The Huffington Post.

Appearing Tuesday before the Senate Foreign Relations Committee to discuss a new congressional authorization of military force, Kerry said the Obama administration sought an authorization “specifically against the terrorist group known as ISIL, though in the region is it called Daesh, and specifically because they believe very deeply it is not a state and it does not represent Islam.”

So, yeah. Keep up. This is about as much as we’re going to get for humor in war.