Why does Donald Trump look like a wax statue in a dictator’s palace? 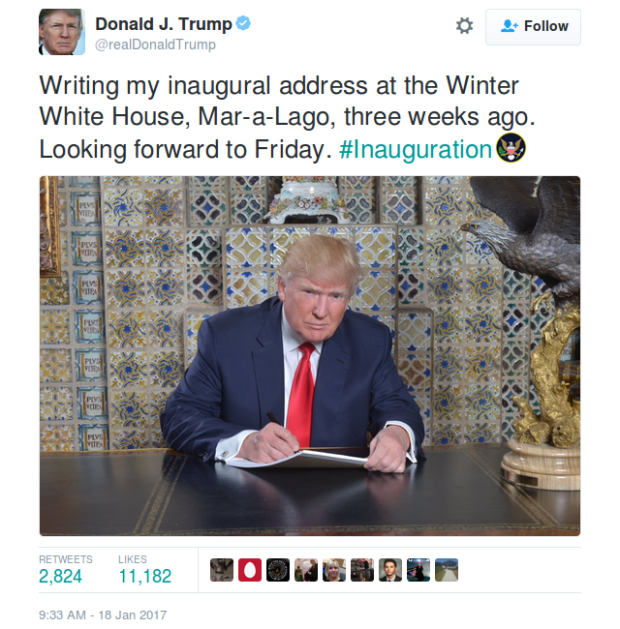 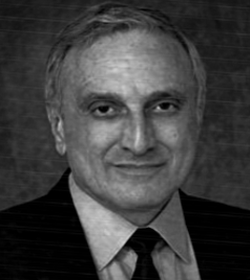 In the interview with arts publication Artvoice, the real estate developer was asked what he would most like to happen in the New Year.

He responded: “Obama catches mad cow disease after being caught having relations with a Herford. He dies before trial and is buried in a cow pasture next to [senior White House adviser] Valerie Jarrett, who died weeks prior, after being convicted of sedition and treason, when a Jihady cell mate mistook her being a nice person and decapitated her.”

He also said he’d like to see first lady Michelle Obama “return to being a male and let loose in the outback of Zimbabwe where she lives comfortable in a cave with Maxie, the gorilla.”

This is the important question: Why?

END_OF_DOCUMENT_TOKEN_TO_BE_REPLACED

“Note, in this three-sentence statement, Team Trump (1) attacked the U.S. intelligence community in order to defend Russia; (2) flagrantly lied about the 2016 election results; and (3) and made no effort to deny the accuracy of the revelations, saying instead that we should ‘move on,’ rather than acknowledge Russian intervention in the American election, which Republicans chose to overlook, apparently to advance their own interests.”

This is, genuinely, extraordinary. For all people wish to carry on about “both sides” and all that, some days it seems worth noting that there really is a difference.

END_OF_DOCUMENT_TOKEN_TO_BE_REPLACED

The underlying question of the #trumpswindle seems at once both straightforward and incredibly twisted. It is, after all, a complicated question of expectation and interpretation, of what one says versus what one means, and it might be that Freud was correct and they’re all hung up on something about their mothers, or maybe object relations subsumes that neurotic array as some primary identification of something having to do with authority accommodated and assimilated. And while it is just as true that the preceding sentence is likely as vapid as it is correct, the simpler expression is that it never really was about all those other things because Donald Trump’s supporters are, at heart, after the thrill of wicked and vicious empowerment, which is the legendary birthright of every superior intellect and conscience.

If it seems really easy to overstate the #trumpswindle, remember why truth is stranger than fiction.

Let us start, then, at Slate, with Ben Mathis-Lilley:

In Florida, meanwhile, the Department of Justice has just announced the arrest of a Tampa, Florida–area woman who—believing, like [InfoWars host Alex] Jones, that the deaths at Sandy Hook were faked—threatened to kill one of the bereaved parents of a Sandy Hook victim ....

The parent in question, Len Pozner, is what New York magazine described in a September piece as “the de facto leader of the [Sandy Hook] anti-hoaxer movement”; he operates an advocacy organization for family members of mass-killing victims who’ve been harassed by truthers and has filed a lawsuit against one prominent Sandy Hook denier for invasion of privacy. Pozner told the magazine that he was actually once an Infowars listener himself before losing his 6-year-old son Noah in Newtown. Said Pozner: “I probably listened to an Alex Jones podcast after I dropped the kids off at school that morning” ....

END_OF_DOCUMENT_TOKEN_TO_BE_REPLACED

Via Huffington Post, Nina Golgowski attempts to explain the what seems to be the latest fashionable trend among president-elect Trump’s voters:

A Chicago shopper was filmed having a meltdown inside of a Michaels craft store, during which she accused the staff of discriminating against her for being white and for voting for Donald Trump.

“And I voted for Trump, so there. You want to kick me out because of that? And look who won,” the unidentified woman is heard yelling at employees.

According to the 10-minute video uploaded to YouTube, the woman believed that a black employee had tried to “force” her to purchase a $1 reusable bag. Employees can be heard telling her that they offered her the bag because they were out of disposable ones that met the size of her larger items.

It didn’t take long before the shopper spotted Grady’s camera and turned on her. Among other things, the woman accused Grady’s toddler of shoplifting.

“I was just discriminated against by two black women and you being a white woman and you literally thinking that’s OK,” the angry woman tells her. “Why don’t you go home to your husband who’s cheating on you.”

END_OF_DOCUMENT_TOKEN_TO_BE_REPLACED

“Take a moment to imagine the feeding frenzy that would exist right now if, just two weeks after the election, the Clinton Foundation quietly told the IRS it broke the law.”

The msnbc producer and blogger has a point. For all the scandalmongering about family foundations, we knew before the election that the Donald J. Trump Foundation had some skeletons in its closet.

President-elect Donald Trump’s charitable foundation has admitted to the IRS that it violated a legal prohibition against “self-dealing,” which bars nonprofit leaders from using their charity’s money to help themselves, their businesses or their families.

That admission was contained in the Donald J. Trump Foundation’s IRS tax filings for 2015, which were recently posted online at the nonprofit-tracking site GuideStar. A GuideStar spokesman said the forms were uploaded by the Trump Foundation’s law firm, Morgan, Lewis and Bockius ....

.... In one section of the form, the IRS asked if the Trump Foundation had transferred “income or assets to a disqualified person.” A disqualified person, in this context, might be Trump―the foundation’s president―or a member of his family, or a Trump-owned business.

END_OF_DOCUMENT_TOKEN_TO_BE_REPLACED

“Boiling the election results down to Russian interference alone is ridiculous, of course; we’re dumb and racist enough to have shot ourselves in the dick all on our own.”

It’s a pretty good line, isn’t it? To the other, we probably shouldn’t let that distract us from the fact that Admiral Michael Rogers, Commander of United States Cyber Command, and Director of the National Security Agency, twice over the course of his remarks for a Wall Street Journal shindig, accused the Russian government of using Wikileaks in order to tamper with the U.S. election.

But all this also calls to mind the Washington Post’s report on how Breitbart chair Steve Bannon subtly manipulated Donald Trump in a series of radio interviews earlier this year. It’s almost as though Donald Trump is getting played in ways he can’t possibly understand, by people with much bigger goals than merely being his friend.

Fahrenthold, David A. and Frances Stead Sellers. “How Bannon flattered and coaxed Trump on policies key to the alt-right”. The Washington Post. 15 November 2016.

It has arrived. Nutty right wing propaganda has now been reported as fact on CNN. While watching Anderson Cooper 360, they did a story on World Leaders response to Trump. They reported as fact the following claim:

“Canadian President Justin Trudeau had called for a ban on Trump.”

First of all, Canada doesn’t have a President. It has a Prime Minister. I’ve followed Justin Trudeau because I’m really interested in Canadian politics. I really admire the Prime Minister. During the campaign to become Prime Minister, he eloquently said, “Conservatives aren’t our enemies, they’re our neighbors,” so I thought this smelled fishy. I googled this and found that CNN had plagiarized from a fake news site and reported it as fact.

A couple notes probably go here: First, this is hardly the beginning of the Trump Ministry of Propaganda; news organizations do occasionally fall for fake news. To the other, we can think what we want of CNN pulling from Hot Global News. And for whatever excuse CNN and other organizations might give, it seems especially important to pay a bit more attention to source credibility, because we are clearly in a time when falsehood can triumph simply for the fact of making Americans feel better about themselves. That is to say, sure, debunk all you want, but we will hear about this again from some passionate, (ahem!) well-informed advocate who apparently has no idea what is going on. (Never mind that last; the consequences of passionately dedicated ignorance is an inside joke that will, someday soon, and by the fortunes of the Trump administration, become rather quite relevant.)

END_OF_DOCUMENT_TOKEN_TO_BE_REPLACED

Donald Trump’s vast business holdings will be placed into a blind trust with his oldest three children in charge, according to the president-elect’s attorney.

Trump during his campaign faced questions about how he’d handle his business dealings and potential conflicts if he were to become president, saying repeatedly he’d separate himself from the company. And while his lawyer Thursday used the term “blind trust” when discussing the family’s upcoming financial arrangement, putting Trump’s children in charge of a set of assets that their father is aware of does not constitute a blind trust. Under the legal definition of a blind trust, a public official places his finances under the management of an independent party. The official would have no knowledge of what is in the trust or how it is managed. On CNN, Cohen conceded Trump would have a difficult time satisfying critics who continue to raise doubts about their plans.

This is how Trump voters and supporters will work around the cognitive dissonance of cronyism and nepotism in their ostensibly anti-corruption, anti-cronyist, anti-Establishment, anti-institutional figurehead: Ego defense. Redefining terms like nepotism and cronyism in order to exclude what one desperately wishes to protect requires some manner of neurotic complex; there is no precise classification for cravenly making it up as you go, so denial and suppression cannot in themselves suffice, as it is not so straightforward. There is some pretense of intellectualization and rationalization, but scrambling to justify post hoc projection and displacement―while flailing into concomitant secondary denial about whatever prior sentiments and processes one is replacingα―is neither intellectual nor rational.

END_OF_DOCUMENT_TOKEN_TO_BE_REPLACED

Donald Trump doesn’t have any background in health care policy, and throughout the presidential campaign, he never demonstrated any interest in learning the basic details. The Republican knew he hated “Obamacare”―though it was never altogether clear why―and committed to the law’s repeal, but beyond that, Trump’s position was largely hollow.

At one point, pressed on his specific position, Trump vowed to “repeal and replace” the Affordable Care Act with “something terrific”―without making any effort to explain what that “something” might be or how it’d be “terrific.”

Today, Trump talked to the Wall Street Journal, where the president-elect said something about health care that’s quite a bit different from his previous rhetoric ....

.... Specifically, Trump talked about keeping protections for Americans with pre-existing conditions and allowing young adults to remain on their family plans until they’re 26.

The president-elect told the Journal, “I like those very much.”

Trump went on to say that, as part of his lengthy meeting with the president, Obama pointed to specific provisions of the ACA that are worth preserving. “I told him I will look at his suggestions, and out of respect, I will do that,” Trump said, adding that the law “will be amended, or repealed and replaced.”

You’ll notice that “amended” is a new addition to Trump’s health care vernacular.

We might wonder, when it turns out that President Trump is not simply just another disappointment, but, rather, a stellar failure compared to any pretense of expectation his voters might have been stupid enough to believe, whether those people will be unable to countenance their own failures or simply blame others for the mere fact of a Trump administration.