This is not an occasion on which I get to say, “You might have noticed”, because, in all sincerity, why would you?

Still, it is to some degree worth mentioning that a particular frustration with the Huffington Post compels me to give your organization some shit, because, quite frankly, I just don’t get HuffPo’s obsession with bulwarking misogyny.

The Duchess Effect is real. And this year, it was stronger than ever―probably because the Duchess of Cambridge’s style keeps getting better.

Between her red carpet gowns, dashing coats and whimsical hats, we were gushing over her sartorial choices for basically 12 months straight.

Okay, that’s not entirely accurate. That is to say, yes, I can imagine market dynamics and consumer data telling your teams that gendertyping and shaming women gets you more clicks than the column meters the Huffington Post Women page has given to the critique against sexism in general and misogyny in particular. 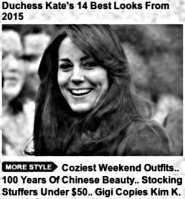 To the other, that is not exactly helpful, you know?

Promoting misogyny is not a useful, or even decent, profession. Please stop, immediately.

And, you know, if it is impossible to be a fashion editor without treating women like the shit we scrape off our shoes, maybe trade the section out for architecture and skip the bits about the fifteen best racks carved onto statue-women, or the question of whether Mary was ever caught dead wearing the same outfit as Mary Magdalene.

No, really. I get that people need to make a living. But, you know, really?

And I recognize that any woman has exactly the same right to be a misogynist as any man.

But it’s also true, I’m a sexist, because I honestly can’t understand why you would do this; and it’s true as well that I am mystified at the idea that a woman would hope to make a living by pushing the stupid ideas that justify treating women like shit.

Look, whatever else, I’m a father of a daughter, and I really, really need you to stop making it harder for society to acknowledge and recognize the full breadth of her humanity.

Our society has enough people trying to grind women under their shoes and then scrape them off in disgust. Why would you?