“Abby said that she wanted her final World Cup to be like a fairytale. And I’m not sure she could have written a better ending: a world champion at last, draped in the Stars and Stripes, showing us all how far we’ve come―on and off the field―by sharing a celebratory kiss with her wife.”

This is an illustration of the difference. 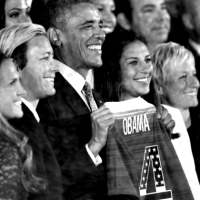 Two days later, over at the Capitol:

On Thursday, Senate Republicans blocked a resolution that called on soccer’s global governing body to “immediately eliminate gender pay inequity and treat all athletes with the same respect and dignity.”

“It is a shame that in the Senate, we cannot even agree to pass a resolution that calls for the equal treatment of male and female athletes. If we cannot even pass a non-binding resolution, how can we ever achieve real pay equity for women?” said Sen. Patrick Leahy (D-VT), who introduced the resolution this summer.

Earlier this year at the FIFA Women’s World Cup, the pay disparity between male and female soccer players was put into sharp focus when it was reported that while the U.S. Women’s National Team received $2 million for winning the championship, men’s teams who lost in the first round of the 2014 World Cup, including the U.S. men’s team, received $8 million.

Remember this, when people tell you there is no difference, that they’re all the same.