Washington state can force pharmacies to dispense Plan B or other emergency contraceptives, a federal appeals court said Thursday in a long-running lawsuit brought by pharmacists who said they have religious objections to providing the drugs.

The unanimous decision Thursday by the three-judge panel of the 9th U.S. Circuit Court of Appeals overturned a 2012 ruling by U.S. District Court Judge Ronald B. Leighton, who had found that the state’s rules violated the religious freedom of pharmacy owners. It was the second time the appeals court reversed Leighton in the case.

“This unanimous decision is a major victory for the people of Washington,” Attorney General Bob Ferguson said in a prepared statement. “Decisions regarding medical care — including reproductive rights — are appropriately between a patient and his or her medical professionals.”

No, really. We’re into the presidential preseason. Do we really think Republicans are going to let this pass?

Then again, the lines are pretty clearly drawn this time; social conservatives can afford to lose, just not spectacularly and publicly. And should we add the consideration that they would be abandoning the marriage equality headlines in order to be seen hounding women yet again? It’s always a mystery, because most days soccons are perfectly happy to come for the women, and come again.

When your conscience requires your righteousness to harm others, we might suggest a careful inspection of its components. Should you do this for the Glory of the Lord, we might beg consideration of where your earthly judgment and cruelty stands within the God’s purview.

The Ninth said no. Round three, anyone?

This is just strange:

A sign posted by a Knoxville church continues to raise eyebrows and spark both discussion and outrage after it was posted online.

The sign posted by Knoxville Baptist Tabernacle Church read “Remember Satan was the first to demand equal rights.” Many people posted the picture to the WATE 6 On Your Side Facebook and Twitter pages, starting a debate about what the sign really means.

The pastor says the purpose of the sign was to send a message about unity and spark conversation in the community. He says it wasn’t meant to offend anyone.

“Our sign referencing Satan demanding his equal rights to ascend into the heavens and be God was simply ‘I’ and all about that individual,” said Pastor Tony Greene. “It was not a statement against any one group in particular, you know what about the rights of the unborn babies, the rights of children, the rights of everyone?”

There are a few things here, but let us, please, simply start with the obvious: Did he just turn that into a plea for equal rights?

END_OF_DOCUMENT_TOKEN_TO_BE_REPLACED

So … right. Personhood for chimpanzees … and … go:

Can an animal who possesses the essential qualities of personhood ever be considered, in the eyes of the law, a person?

As of now, the answer is no. But a panel of New York state judges yesterday considered that question, which was posed by a group called the Nonhuman Rights Project on behalf of a 26-year-old chimpanzee named Tommy.

It is a compelling question, yet we should not feel silly for failing to grasp the implications; the range and magnitude are unknown, though we might simply say they are tremendous. Brandon Keim of Wired also offered some background when the case arose last year.

It is easy enough to agree with the proposition that species is irrelevant to personhood if one has cognitive capacity when we stare at walking, talking, and often shooting extraterrestrials on the silver screen, or reading adventures of human assassins who might otherwise fall in love with elves, but one might reasonably suggest we have problems dealing with questions of personhood in real life, insofar as they actually pertain to people we would otherwise already recognize as people. To the other, that does not mean the question of whether or not a chimpanzee counts as a person is without merit.

Still, though, given that all this occurs against a backdrop of an election season in which questions of personhood are emerging as a prominent, confusing, and, apparently, confused issue, the chimp factor is the something of a wildcard. That is to say, it seems rather difficult to suddenly screech up and shift contexts, especially because the implications of the new question could, under certain circumstances—e.g., personhood for chimpanzees—further complicate and confuse the ongoing political context that will, under certain circumstances—e.g., personhood for human zygotes—ultimately become a judicial context.

Yet it remains an interesting question.

Jen Sorensen undertook the obvious point in the wake of the Supreme Court’s quixotic disaster otherwise known as Burwell v. Hobby Lobby. And, yes, she wins the race on style. 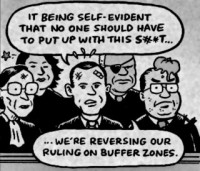 The truth is that no matter how much Justice Scalia might need to be tomatosmacked upside the head, it would be inappropriate to actually start chucking table vegetables.

Meanwhile, the question arises, looms, persists: Then what does it take?

The explanation for this is simple enough under a general psychoanalysis of history: We judge women’s humanity as a reflection of manhood.