Rep. Tulsi Gabbard (D-HI02), along the way to seeking a 2020 Democratic presidential nod, weighed in on the slow-leaking debacle of Attorney General William Barr’s summary that is not a summary, noting Thursday:

Mueller reported Trump did not collude with Russia to influence our elections. Now we must put aside partisan interests, move forward, and work to unite our country to deal with the serious challenges we face.

Friday’s clarification letter regarding the Attorney General’s previous letter continues word gamesα that ought to sober up some ebullient pro-Trump celebration among ostensible progressives and leftists. Meanwhile, testable statements such as the Distinguished Member from Hawai’i Two offers can eventually be checked. The thing is, if President Trump is hoping A.G. Barr can hold out long enough at a threshold of potential misprision, we might wonder at those who seek to either abet or else profit thereby. 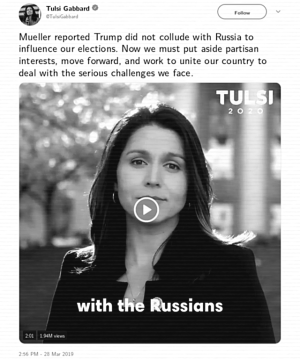 The upside for Ms. Gabbard, of course, is if it somehow turns out President Trump is somehow innocent to the point of driven snow. “Mueller reported Trump did not collude with Russia to influence our elections”, the Congresswoman wrote. Not even the 24 March letter from the Attorney General actually says that; Tulsi Gabbard seems to very anxious to advance the Trump supporters’ pitch.Toward which end, we should probably note that among the mysteries of the internet, there is this: The part where the video frame in Congreswoman Gabbard’s tweet seems to say, “Tulsi 2020 … with the Russians”, is entirely coincidental; that’s just how it came up on the screen.Still, this is the sort of gaffe that can haunt.