But that merely begs its own subsequence: To whom is it a major revelation? Why is it such a surprise? What are the implications of such ignorance about stupidity?

As history repeats itself it also becomes more apparent that while nobody can be perfect, there really is a substantive difference between one frailty and the next as shown from one human being to the next.

Ed. note: The following is a repost of a Facebook comment offered to a friend from New Zealand who is constantly baffled by what he witnesses in the American political process, and happened to inquire about Republican efforts to … well, right. It has to do with recent House bills pertaining to the role of science in government policy.

I think the best way to explain it is to once again invoke a Cold War analogy; after all, depicting Democrats as “liberals”, with “liberals” meaning “Soviet Communists” was a key to Ronald Reagan’s electoral success.

But think about it this way, too: By that analogy, Republicans are the “capitalists”.

So it goes, then, that if we look at votes as “capital”, then the actions of the RNC, Congressional Republicans, and various surrogates and allies make sense: Get the capital by whatever means necessary.

That’s why the whole thing is so puzzling to people who, you know, have a conscience. The GOP ain’t playin’ that way. This is about winning votes, and nothing more. And in the United States, conservative voters will take whatever they can get to reinforce their platform. Additionally, superstition and subjective moral outrage are much more attractive to most American voters than obvious logic that, if attended, would skip the melodrama and slapstick that has become our political system.

In that context, it becomes a capitalistic ratings game; our elections become a functional part of our entertainment industry.

What Republicans are trying to do here is twofold: (1) Bolster their own political fantasies by excluding reality; (2) create a situation in which government will experience an even greater failure about its performance of duty so that they can complain even louder that government just doesn’t work.

Abrams, Lindsay. “House Republicans just passed a bill forbidding scientists from advising the EPA on their own research”. Salon. 19 November 2014.

“One of the most fascinating things about this election was comparing what people actually believe in versus what or who they actually voted for. Voting against your own interests seemed to be the dominant theme in this election. Happy with your Kentucky Kynect health exchange, brought to you by Obama’s Affordable Care Act? Then you’ll definitely want to vote for Mitch McConnell so he can keep trying to dismantle Obamacare bit by bit. Huh?”

To the one, the election is over and the People have spoken. In Iowa, intelligence and basic competence are anathema; in Kansas, voters objected to the prospect of fiscal solvency; Colorado voters decided it just wasn’t a year in which the human rights of women in their state have anything to do with anyone. Voters knew, going in, what they were asking for, and what they asked for is more gridlock, melodrama, and basic uselessness of government. So, yes, the election is over, and we need to get used to it. To the other, though, a couple brief points:

• It is difficult to not focus on that sense of amazement; this is difficult since people are expected to simply shut up and move on, but history will have a hard time explaining what happened in this year-six election. Perhaps some will point to Obama, and that only makes sense if people ignore actual facts or wonder yet again about the racism question; if this was a referendum on Obama and his policies, then it’s hard to comprehend why people who like what the ACA does would vote against it. Perhaps they believed the media narratives, which make sense unto themselves but only if the audience accounts specifically for the fact that actual facts are barred from that discourse. As Rob Corddry once joked in a role as a media correspondent, “Listen buddy: not my job to stand between the people talking to me and the people listening to me.” Unfortunately, it’s not simply a joke; Jim Lehrer, a titan of television journalism, agreed that it was not his job, as a reporter, to separate fact from fiction. But that’s the thing: To the one, the election is over. To the other, though, explaining what happened in any justifiable historical context requires addressing the apparent paradoxes in the outcomes, so we will continue to see such bewilderment as cartoonist Mark Fiore expresses.

• The second point is simple enough: If you choose to complain of gridlock and other governmental silliness over the next couple years, and you voted for Republicans in the 2014 midterm, then you need to shut the hell up and stop complaining about getting what you wanted. It would be one thing to leave such blatant stupidity to itself, except it seems somewhat contagious. Consider a nearly unhinged proposition: In order for President Obama to show “leadership” satisfactory to these people, he must follow the Republican leadership in the U.S. House of Representatives. Think about that for a moment; Obama must show leadership by not leading, unless Republicans want to skip on tough votes, in which case Obama needs to show leadership, for which Republicans intend to either sue him in court or impeach him in Congress. When it comes to What American Voters Want, this actually seems like a newly-discovered valence of absurdity. It’s one thing to say the GOP is playing politics; it’s quite another to pretend that such idiotic shenannigans are not what our Republican neighbors want. So when our conservative neighbors lament government inefficiency, the appropriate response is to tell them to shut up and stop complaining about getting what they voted for.

So here’s the score.

There is always a ripple of gratification when it emerges that one is not alone in noticing something. That is to say, as something obvious occurs and nobody else seems to notice, or else they simply do not care, there will always be a sensation of encouragement in recognizing that other people both notice and care. 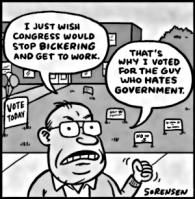 So, yes, it is nice to know that we at This Is are not alone in the Universe; other people notice the functional contradiction. To the other, it is also a price of political liberalism: More often than not, when you’re right, there is no cause for celebration.

You can beat them by a mile in America. You’ll be laughing all the while, in America. They don’t care how you do it in America; just do it with style and a smile.

So cover your eyes, and cover your heart, and pray for the ones you’re tearing apart.

We might, of course, encourage people to vote their consciences, but given what passes for conscience these days that might be a bad idea. That is to say, conscience is supposed to be about somethng more than immediate personal satisfaction.

Iowa, for instance. Watch for the returns from Iowa; you’ll likely have reason to laugh, albeit perhaps bitterly, about the proposition of conscience in Iowa.

Certes, we can hope for better than what the polling suggests in the Hawkeye State. And nothing would make us happier at This Is than to be proven wrong.

One of the curses of leftism is that it is more often tragic than anything else when our fretful prognostications are demonstrated true.

Please don't forget to vote! Unless you're going to vote for bad stuff, then go ahead and forget.

Rob Wynia of Floater makes the point well enough, as we’ve reached a point at which uninformed voters might actually be a threat to societal stability. But this really is supposed to be some sort of democracy, so, yeah, vote.

But it would also be nice if more voters actually took time to comprehend what they’re voting on. And, hey, you hear that? Yes, you can get extraordinary praise for simply doing your job.

Still, though, today is Election Day, and the vote is not only your right, but also your civic duty. Please do not treat that duty lightly; otherwise you might find yourself in a position like Iowa, where the question is so much about what letter goes in the parenthetical note after a candidate’s name that Iowans are on the verge of humiliating themselves.