“It depends how radically Mr. Bush plans to restructure the economy.”

Okay, work with me, here: If we bear in mind that a writer should always accommodate the intended audience, then what are we supposed to think about articles like “6 takeaways from Bush’s launch” by Niall Stanage of The Hill, which actually does, in fact, feature a sentence that reads, “Here are six takeaways from a positive day for the Bush campaign”?

Jeb Bush had a lot riding on his official presidential launch on Monday.

Stumbles over the last few months have stripped the sense that the former Florida governor is the front-runner for the Republican nomination next year.

Bush has looked rusty at times on the campaign trail, and a reshuffling of his campaign team just last week highlighted the sense that he needs to get his candidacy in order. But the professionalism of Monday’s launch is likely to calm the nerves of some early Bush backers disconcerted by the early missteps.

Here are six takeaways from a positive day for the Bush campaign.

―it really is a pretty good primer, and carries the metavalue of aptly demonstrating the lowered expectations permeating the GOP’s 2016 nomination contest.

END_OF_DOCUMENT_TOKEN_TO_BE_REPLACED

There are, of course, dramatic interpretations waiting for the pundits to pounce, but four House Appropriations chair assignments last week include the sort of trivia that actually tell us a bit about how our government works. David Hawkings of Roll Call detailed some of the significant aspects of the four assignments brought on by two resignations and the passing of Rep. C.W. Bill Young (FL-13):

The altered assignments mean a changed membership for one-third of the group known all over Capitol Hill as the college of cardinals. The allusion to the power players of the Catholic Church is not only because of the significant unilateral power these chairmen have to reward or restrict federal agencies through subtle tugs on the federal purse strings. It also refers to their somewhat secretive code of conduct for rewarding colleagues in both parties who embrace the panel’s spending culture — and punishing those who don’t.

This latter code has frayed somewhat since earmarking became verboten and the GOP majority unified behind the goal of cutting the discretionary part of the budget that appropriators control. But it still remains solidly in force at the margins. And so — if a comprehensive omnibus spending package is going to be written to dictate spending for the 35 weeks after Jan. 15, when the current continuing resolution expires — the four new and repositioned chairmen, along with their eight colleagues, will each be called on to quickly bless hundreds of small trade-offs and compromises.

“Being an Appropriations cardinal is an incredibly important job with great responsibility,” said Chairman Hal Rogers of Kentucky, because lawmakers must be “responsible and pragmatic leaders who get the job done.” That’s a rare characteristic in the total-budget-breakdown era of the moment.

END_OF_DOCUMENT_TOKEN_TO_BE_REPLACED

Given the extremism of Paul’s libertarian politics—most famously, he’s quarreled with the 1964 Civil Rights Act’s prohibition against discrimination by privately-owned businesses—one may reasonably suppose that most of the liberal and/or mainstream centrist pundits who tout Paul as a likely or even plausible presidential nominee would never dream of voting for him themselves. What they seem to overlook is that an awful lot of conservatives would never vote for him, either. Indeed, to judge from the conservative press these days, Paul’s fellow Republicans can’t stand him. 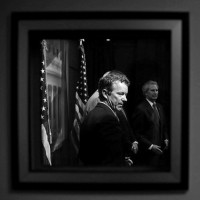 It’s long been apparent that the GOP’s foreign-policy hawks don’t like Paul, a foreign-policy dove who attracted much attention in March for waging a 13-hour “talking” filibuster over U.S. drone policy. Arizona Sen. John McCain has called Paul a “wacko bird.” (McCain later apologized, and still later joked that if Paul and Hillary Clinton are the nominees, “it’s gonna be a tough choice.”) The Washington Post’s neoconservative blogger Jennifer Rubin has called Paul (among other things) “amateurish” and “downright dishonest.” Weekly Standard editor Bill Kristol has mocked Paul as the “spokesman for the Code Pink faction of the Republican Party.”

But in recent days it’s become clear that a lot of the economic conservatives who ought to be Paul’s natural constituents don’t much like him either. At issue is an interview Paul gave Bloomberg Businessweek’s Joshua Green in which Paul appeared neither to understand the late economist Milton Friedman’s monetarist theories nor to know that Friedman was deceased. It’s no surprise that liberals like Paul Krugman and Jonathan Chait jumped on Paul for his incoherent criticism of Fed policy (which Paul elaborated in National Review Online). But it was interesting to see conservatives like the American Enterprise Institute’s James Pethokoukis and National Review’s Patrick Brennan do the same.

Indeed, if you want to keep abreast of everything that compromises Paul as a possible presidential contender, you should bypass liberal opinion mongers and objective mainstream news organizations altogether and focus on conservative news sources. The story that Paul aide Jack Hunter was a former neo-Confederate activist who boasted of toasting John Wilkes Booth’s birthday, which eventually led Hunter to resign, did not break in the Nation, but rather in the Washington Free Beacon, a web publication created by the very conservative Center For American Freedom. (Paul is quite testy about the matter.)

And as long as we’re piling on, we should note that Jennifer Rubin went so far as to include him on her list of people who shouldn’t bother running for the White House in 2016. So, yeah. Let’s see how all this 2016 wisdom works out.