“What I wonder is, do the people at Fox think this kind of thing really serves their audience well? I guess they must, or they wouldn’t be doing it. But to me, it shows that they look on that audience as a bunch of suckers.” 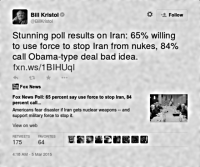 One of the interesting things about The Bubble―the epistemic closure of the conservative information industry that essentially substitutes conspiracy theories and political delusions for reality―is that you can always tell who watches FOX News. To wit, you might hear something in coming days about a poll suggesting a whopping eighty-four percent of Americans oppose the developing nuclear deal with Iran. Even prominent, allegedly respectable conservatives like Bill Kristol are getting in on it.

There are, of course, caveats.