There really isn’t any pretty way to explain it.

Turns out it wasn’t just bad wedding invitations that killed Susan Ross. In fact, it was the actress’ complete lack of comedic chemistry with the Seinfeld cast that led to the death of George Costanza’s fiancé.

I mean, I get that they’re trying to be nice about it and all, but the whole point of the role was that Susan Ross was just creepy.

Alexander explained that though he often had trouble finding the right comedic tone with Swedberg, his cast mates were hard pressed to believe him. It wasn’t until Jerry Seinfeld and Julia Louis-Dreyfus performed extensive material with Swedberg in Season 7 that they took Alexander’s concerns seriously.

The other thing that occurs to me is that I would not care about this bit of useless gossip at all, except in my circles some would assert Seinfeld to be the height of television comedy. Personally, I don’t buy it. Not that the show was horrible, but come on, even the petty gossip is as useless and loathsome as the show’s characters.

Image note: Susan Ross (played by Heidi Swedberg) licking her way into the grave. Detail of frame from Seinfeld. 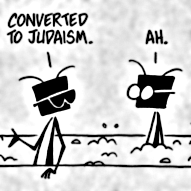 I wish my brother, George, was here.

Actually, his name isn’t George, but he is a proper student of comedy, which apparently is why he thinks Seinfeld was funny, but never mind, it had its moments, and no, that’s not a Costanza joke.

Still, though, one wonders about the comedic theory prescribing when to hit so hard in the second panel. It almost feels like one has no place to go but down.

Then again, it’s Adam Huber, so that means there is plenty of room for a triple-gainer with a two and half twist.