“Now that we can get married and queer people having children is becoming more and more accepted, it seems we’ve forgotten that sexual liberation has always been, in my mind at least, a cornerstone of queer liberation. And it seems some queers think we’ve just been having all of this sex and pushing back against all of these sexual boundaries for all of these years as just another way to pass the time until we could become just like straight people. Like, ‘Hmm. We can’t get married yet. What should we do in the meantime? Needlepoint? Nah. Competitive baking? No. Oh, I’ve got it! Let’s get off!'” 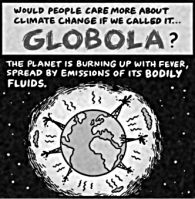 Pretty straightforward. But perhaps we should try pornography, instead. Oh, wait. Raincoats. After all, what’s a little disease compared to wearing a condom?

That is to say, while it is easy enough to stand for the idea of pornography against the various complaints of obscenity and misogyny, given the potential for the (ahem!) “art form” to show us the naughty bits without all the vileness, well, there is a difference between theory and practice.

So then, rather than offering a critique of the difference between stylized gangrape pornography and some random couple that wants to spice up their sex life by releasing video of his sac and pucker bouncing up and down on the screen while he drills her, maybe it would be best to simply skip it all and go back to fretting about ebola. Or climate change. Or … or … well, right.

Or maybe we could just mix it all up—disease, the effects of climate change, and pornography—smoke a bowl, and listen to some Bad Company, instead.