Critics of Amazon’s “race to the bottom” as it searches for a home for its second headquarters said on Thursday that the company’s newly released shortlist of 20 cities highlights a crisis in the U.S. economy—one exemplified by the huge incentives offered to Amazon in the bidding war among potential hosts.

Rep. Keith Ellison (D-Minn.) was among those slamming Amazon and the state and local governments willing to give billions of dollars in tax breaks to the extremely wealthy multinational company. 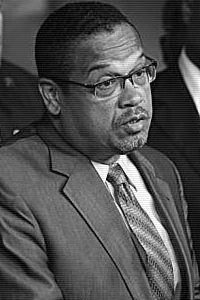 Tax breaks to Amazon promised by New Jersey: $7 billion. Tax breaks promised by Illinois: $2 billion. Something is deeply wrong with our economy & democracy when local governments offer up their tax base to a corporation worth over $500 billion.

Nor is this really new. But, yes, if this is the American Way, then we might wish to wonder why.

The Cowardly Badger wants another do-over, but this time for one of his policy achievements, lowering a worker’s quality of life. Paul Waldman explains Wisconsin Gov. Scott Walker’s dubious presidential ambition:

Scott Walker wants to take his fight against organized labor national. Today he released a plan for a new war not just on union representation, but on worker rights in general.

It’s quite a document, one we might call Scott Walker’s Race to the Bottom.

I have no doubt that Walker is sincere in his desire to see every labor union crushed and every vestige of workers’ power banished — or, in his lingo, “flexibility.” I’d also be surprised if any of the other candidates objected to any part of it. So the plan is worth understanding if you want to grasp what today’s GOP is offering today’s workers.

While he doesn’t say so explicitly, what Walker seems to hope for is really a world without any labor unions at all, or at the very least a world where unions are so weakened that they are unable to advocate for anyone.

Right. Two and two. Put them together. The outcome really is that obvious.

There are those who will need your help to understand; thus, put as simply as possible: Those aren’t opulent contracts; other workers could have had them, too, if they had unions guarding their standard of living.

And then, before they get too confused, remind them: This is what voters wanted when Republicans pitched the better life of tomorrow without unions. Yes, this lesser quality of life.