Sometimes the idea of “don’t ask, don’t tell” is self-imposed. And among those occasions are some such that we needn’t wonder why. Nor should that be taken judgementally; I would no more notice the panties on Adam’s head than his girlfriend’s latest haircut. It’s just, you know, sometimes you wake up in the wrong place to be wearing someone else’s panties on your head, and, yeah, I suppose that can be embarrassing. To the other, though, this is one of those circumstances for which I have exactly no advice.

“Now that we can get married and queer people having children is becoming more and more accepted, it seems we’ve forgotten that sexual liberation has always been, in my mind at least, a cornerstone of queer liberation. And it seems some queers think we’ve just been having all of this sex and pushing back against all of these sexual boundaries for all of these years as just another way to pass the time until we could become just like straight people. Like, ‘Hmm. We can’t get married yet. What should we do in the meantime? Needlepoint? Nah. Competitive baking? No. Oh, I’ve got it! Let’s get off!'”

Even though it would make for a crass joke, there are days when we find ourselves wishing it was a punch line. The thing is that as setups go, Jen Sorensen’s explanation only goes downhill from there. And no, that’s not a complaint or disdainful critique of the cartoon; it’s a very good cartoon worth the click to read. Truth is stranger than fiction. You can’t make this sort of joke up. And, besides, you know. Americans. Conservatives. Family values. It’s not actually funny. She is describing a disaster; no matter how we tell it, the story only gets worse as it goes along.

This is a matter of priorities. We are the United States of America, and we damn well know what is important to us.

And this is how we show it. 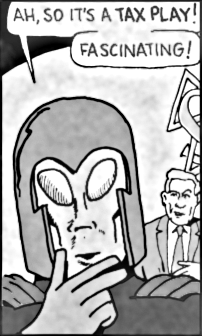 So … right. This is … er … ah … well, you know. This is hardly news, but any time we get to sit around and chill with Xenu is time well spent, right?

Something about priorities goes here, I’m certain. Then again, the unresolved implication would be whose priorities.

Or should I try the political joke about how we need to be careful to not achieve such equality that our Christian neighbors ruin themselves fighting for their supremacy? After all, next up is, well, the Xenubites.

Certes, we can do better. Right?

Oh, wait, that’s probably not as good of a joke as its temptation suggests.

Too bad ’bout that.

Nor was the joke worth it.

It’s pretty simple. To the one, we can all grasp the idea of taking a bit of time to charge up before a long, hard run. To the other, there is a question of priorities:

Should an aspiring presidential candidate break a self-imposed silence for …

• … a civil rights question of vital importance and escalating clamor?

• … the satsifaction of some lobbyists in Iowa, where you hope to win the Ames Straw Poll later this year?

Whatever you or I might decide, we are not Sen. Rand Paul (R-KY).

Despite the Paul camp’s avowal of reticence in the week leading up to his announcement, in a story published in Politico on Wednesday afternoon, an anonymous Paul aide was quoted affirming the senator’s support for a bill backed by the ethanol industry―an influential lobbying bloc in Iowa.

At least we know what is important to Sen. Paul. You know, because he is about to spend months telling us how much he cares about this issue or that. His priorities are clear.

Sometimes it is hard to know just how to respond. React. Perceive. Feel.

Author Peter Monn appears to be retiring from the fight:

I don’t claim to know or understand God. I know there is one and I’m not it. I don’t need to reinvent the wheel but I also believe in religious freedom. But this isn’t about religious freedom. What knowing LGBT person would want to spend their money or hire someone who so opposed who they are at their core? Not me.

But I’m tired of fighting. I’ve been fighting since I was 5 years old to have other people accept me for something I never understood in the first place. And if I couldn’t understand it then I know they certainly can’t understand. And I’m done trying. I’m tired of explaining to people who would never be affected by such a bill how it haunts me and once again makes me feel different; less than.

My life is probably more than half over anyway. This is for our children. I refuse to fight so that when I’m 80 I can have my picture taken for the local paper because it’s such an honor that they finally passed some ridiculous bill of rights that I should have had all along. Nope. I’m done fighting. And to me, that is freedom. It is obvious that my word is not important anyway. It is obvious that my life does not matter to those voting in fear, hiding behind religious freedoms that do not specifically affect their personal lives. The best that I can do is step away.

There must be something I’m missing, because the first thought to mind is bitter: “Go tell it to the headstones.”

To the other, many of us hid while others stood the line for us; it is hard to protest the desire to stop fighting and simply live.

There are others who will fill the gap in the line. This isn’t over yet.

Thank you for your service, Mr. Monn; we are all, truly, grateful.

Be well. You helped with the heavy lifting; we’ll take it from here.

And we will stand. We will speak. We will fight. And we will win. And then we can all get on with the business of living.

Monn, Peter. “How I Will Express My Religious Freedom in Indiana”. The Huffington Post. 24 March 2015.

This is what it comes to. 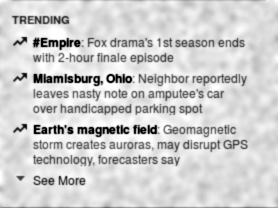 This is what we do with literacy.

I suppose, then, that while it is easy enough to say we shouldn’t be surprised that the season finale of a popular television series is trending, I’m not certain why the trending aspect is the fact that a finale is a two-hour episode.

Yeah. This is what we do with literacy.

Image note: Facebook “trending” widget, 19 March 2015, 1:49 PDT. Apparently people who didn’t watch the show need to know how long it was. Wait a minute, that doesn’t work, does it? Why would we care? Oh, dear. That means either Empire viewers are really, really stupid, or Facebook is. Flip a coin.

Something about priorities goes here. And in our experience the underlying sentiment is not uncommon, yet many people do not like to admit it.