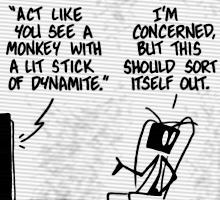 You know, this was actually a Brexit joke, and at the time, sure, it seemed to have myriad other applications, most notably attitudes toward Donald Trump.

Think back, though. Try to remember what Donald Trump was doing and saying that had everybody horrified, mortified, terrified, apoplectic and wide-eyed. Two months. What trumpaholic trumptacle possessed the headlines two months ago?

Fraud and plagiarism, mostly. As July loomed, the Trump University scandal also tumbled into the Trump Institute branding scandal, something about “heebajeebees”, and questions of competence involving basic arithmetic that also happen to come up at a time when Donald Trump himself could be heard wondering aloud, “Why am I not doing better in the polls?”

As we looked toward July, people still wondered if maybe it would all sort itself out; Mitt Romney even piped up, revealing that one of his sons told him, “You’ve gotta get in, Dad, you’ve gotta get in”.

Naturally, things have only gone downhill from there. Certes, some articles of faith can become dangerous under particular circumstances or according to particular scale, but it really is a comfortable temptation. The superstitious would eye November as the next chance for this all to work itself out.

Never mind. Something about filler goes here. And no, we can’t actually blame Adam.

It is true that if This Is actually issued candidate endorsements, you know, pretending that our opinion actually meant anything significant, we would at this time seriously consider endorsing South Carolina Sen. Lindsey Graham for the Republican nomination.

Clowns to the left of him, jokers to the right – and presidential contender Sen. Lindsey Graham is wondering how the heck he’s not doing better in the polls.

‘On our side, you’ve got the No. 2 guy, tried to kill somebody at 14, and the No. 1 is high energy and crazy as hell,’ Graham said of Ben Carson and Donald Trump, respectively.

‘How am I losing to these guys?’ Graham asked.

The Daily Mail article really is near to hilarious, but that’s the thing. For all the show Lindsey Graham is putting on, it is not as if his politics exactly―or, you know, remotely―match up with the issues and perspectives covered here, but once again the American right wing has become so ridiculous that, yes, the South Carolina Republican becomes so moderate by comparison that one might stand shoulder to shoulder. Mr. Graham seems to have some reasonable perspicacity about the magnitude of the spectacle we are witnessing in the 2016 GOP presidential nomination contest; he is enough of a Party stalwart to bear some caution in his heart toward the future. For now, unfortunately, the serious candidates are judged by popular ratings, not the content of their campaigns. Or, you know, maybe we’re wrong about that. Maybe this really is about the content of their campaigns.

It is, after all, undeniable that Trump and Carson alike seem to prosper by bigotry and potsherd insanity. And as Republicans seem to be at least going through the motions of pretending to prepare themselves for resigning with heaving sigh to the reality of a Donald Trump nomination―over two months before voting begins and delegates gather―we might reasonably wonder at the power of such toxic content.

And all Lindsey Graham wants is to save the Republican Party from itself. And, yeah, you know, if we could get back to former valences of moral bankruptcy of what once counted for dignified conservative politicking in the Republican Party―you know, heartless capitalism and authoritarianism that rolled its eyes at having to occasionally accommodate the disdainful adventures of its rabid social conservative wing―we might at least call it some degree of progress.

Schwab, Nikki. “Lindsey Graham says he’s shocked he’s losing to ‘crazy as hell’ Trump and Ben Carson after retired neurosurgeon admits trying to stab someone when he was a teen”. Daily Mail. 26 October 2015.

END_OF_DOCUMENT_TOKEN_TO_BE_REPLACED

This is something of a challenge: “Michigan has voted Democratic for presidents since Bill Clinton in 1992”, reports Bloomberg’s Chris Christoff. And this week? Well, this is not what we would call the strongest of pitches:

Wisconsin Governor Scott Walker on Monday joined the list of politicians who’ve deflected this question from Michigan reporters: Would you have supported the U.S. loans to General Motors Corp. and Chrysler LLC to get through their 2009 bankruptcies?

“That’s a hypothetical question in the past. We’re going to talk about the future,” Walker said after speaking to 120 Lansing Republicans in an Oldsmobile car museum where he touted less government, less taxation, and more U.S. aggression toward Islamists in the Middle East. It was the first of two appearances Walker planned in Michigan as part of a national tour to build support and money as he explores a presidential run.

And then there is also the question of what a primary fight demands. Perhaps the best thing we might say about Maryland Gov. Martin O’Malley (D) whining half-heartedly about Hillary Clinton, polls, and principles is that it didn’t look or sound very good. We might suggest state Rep. Rick Jones (R-24) take the note, as quotes like, “I believe there’s Bush fatigue in this country”, neither count as ringing endorsements nor actually help anyone or anything.

Then again, when it comes right down to it, look at what is about to happen. This might actually turn out to be the one cycle in which the parties get to burn off all that self-destructive extraneity without it really making much difference. Let them borrow each other’s lines all they want.