This is a sentence that ought to thrill hearts: “America may be closer to a post-gay state of politics than most realize”. Alex Roarty’s report for Roll Call either begs certain questions or else desecrates them; matters of perspective abide.

The St. Jerome Fancy Farm Picnic is an annual showcase for Kentucky’s top politicians to give (they hope) a funny, sharp-elbowed speech at the other party’s expense. While they speak, hundreds of loud-mouthed partisans are encouraged to yell and scream as loudly as they can―as if the American political id was caged in a small pavilion two hours from a major airport. 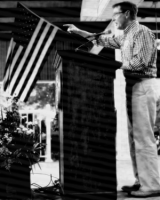 “I want to introduce myself to Sen. McConnell,” he said, looking over to the Senate majority leader seated a few feet away, who minutes earlier had given his own speech. The Republicans, whose voices drowned out the sound of nearby thunder, chanted “Go away Gray!”

The candidate continued: “He earlier called me a ‘nobody.’ Well, let me introduce myself, senator. I am Jim Gray, and I am the guy who is going to beat Rand Paul.”

What went unnoticed this recent Saturday afternoon was that Gray was probably first openly gay person to speak at Fancy Farm. Records aren’t easy to come by for something that began in 1880, but veterans of the event say they can’t recall an openly gay speaker.

This is how Gray’s campaign has gone: He’s making history, and nobody seems to notice. Or, for that matter, care.

END_OF_DOCUMENT_TOKEN_TO_BE_REPLACED

The simplest way to explain it is that you never quite know when the difference is going to bitch-slap you with a fleshy truncheon.

Or was that a little much?

Once upon a time, everything about the song would have annoyed me, especially that pretentious voice absolutely dominating the back end of the track.

There is a usual sort of rant that goes here except today it is beside the point.

Rather, a straightforward question for Adam Huber: Why is Nerdbug gone queerlicious/transvestite/Madonna a yardstick for liberalism?

Maybe it is a local thing, coming from a town that celebrates Midsummer with an unofficial parade of nudists on bicycles, and traditionally includes an official street pageant involving plenty of real-life versions of Nerdbug’s newfound self getting their grooves on with the rest of the neighborhood, who in turn just want an excuse to hoot and holler and enjoy the pasties, foil g-strings, and assorted burlesquerie.

But that also invokes an existential consideration of liberalism best illustrated by a counterpoint. What if instead of a nerd in pointy-boob bikini it was, say, a nerd dressed as an eleven year-old boy preaching bigotry?

Because, you know, who the hell are we to judge … the little boy … taught by his community to judge … and be hateful … and stand up on behalf of injustice?

Or maybe something more grown-up? Like a preacher with a horse, spreading the good news about how people he doesn’t like are mere animals and testifying to his hatred in Jesus’ name, amen?

I mean, really, uncorking one’s inner phabulosity is hardly a test of liberalism; even Dick Cheney can pass.

Then again, I suppose I’m not being fair. When it comes to looking at a hatemonger mongering hate and saying, “Who am I to judge?” one encounters a special sort of conundrum. Finding an effective and useful solution to the challenge of dealing with these people and the fact that they exist would not necessarily make one a liberal, but it would certainly qualify them for nomination as a genius.

The Gay Fray might get a lot of headlines around the U.S., and there is certainly the closet case running the morbid puppet show in Russia, but just who the hell is Edgars Rinkevics?

Actually, he is the Foreign Minister from Latvia who decided to kick down his closet door a few weeks ago:

The Washington Post: Why did you decide to come out now, and what have you made of the reaction?

Rinkevics: These decisions were building very slowly. It certainly takes time and it takes a lot of reflection. A lot of journalists are asking this, trying to find rational or irrational issues. Basically, after a lot of reflection, after also seeing how some of the discussions here in Latvia were proceeding on partnership issues, and also seeing that there has been quite some progress in understanding issues of gays compared even to 10 years ago, 20 years ago, I thought it would be the right decision not to pretend to answer questions about how is your wife doing or your family doing, but simply to make a public announcement. Probably also it helps many people who had a bit of a different situation. In general I have to say that the reaction has been better than I even expected that Thursday night [November 6]. There have been people who simply put out statements of support, there have been people who certainly made critical remarks, some hysterical remarks, but in general it has been received in a very balanced way. And I think it’s very slowly moving off the agenda and people are concentrated on foreign policy agenda as they should be.

It’s a process, and of course attitudes are changing, changing slowly. Let’s not forget that during the whole Soviet Union years and the first years of independence, there have been highly negative attitudes. Those attitudes cannot change overnight. It’s been an issue not just here in Latvia but also in many countries. Such things really take time, such things really need more openness from people.

In general terms, what I have heard many times is we really don’t care who you are in your private life so long as you do your job properly.

The interview with Michael Birnbaum of The Washington Post is one of only a few Mr. Rinkevics has given on the subject.