This is called a digression, and it is not hard to guess its provenance. The other name for this exercise is, writing yourself into a hole. Still, the brazen stupidity of the Trump administration is mystifying unless we reconcile ourselves to some aspect of the irrelevance of norms insofar as we are dealing with a phenomenon akin to the nexus of gaslight and sincerely held belief and overlooking some aspect of perspective that would otherwise explain why the grace of subtlety, or even the tired comfort of basic competence come to seem anathema in #DimensionTrump.

Note aside: It is hard to figure what to do with an inchoate question having to do with the idea of new and old guards, or, such as it is, institutional traditionalism and institutional insurgency. Former White House Press Secretary Sean Spicer has already spent time with the Mueller investigation; while his reputation as a low-skill bullshit artist was well-established during his time as RNC flak, he still bore some connection to an older way of doing things in the Republican Party. That is, with the jig up, it appears he told the Special Counsel’s Office what they wanted to know, and might well end up with no greater culpability than his reputation already earns him. It is hard to imagine how Sarah Huckabee Sanders would answer the Mueller investigation, but appearances, as such, are what drive the amorphous question about generational differences among conservatives. Where the old guard parses carefully and others might seethe at the appearance of will, there is a newer phenomenon by which people simply give voice to their violations as if it has never occurred to them that such behavior is problematic.

Remember the proposition of alternative facts; it is one thing to wonder if we are laughing at absurdity or genuine malady. This is #DimensionTrump; the President will hang his comms shop to boast of obstructing justice; Donald Jr. hands over emails that appear to convict him. With Hope Hicks on the record, apparently, that part of her job was to lie for the White House, and one former Press Secretary having already spoken with and given documents to the Mueller investigation, it starts to feel impossible that Sarah Huckabee Sanders would avoid the Special Counsel’s Office, and we might wonder what happens if she works to evade under question. One need not be Sam Nunberg to suggest the White House Press Secretary “does Trump’s dirty business”, or that, Huckabee Sanders is “terrible”, at her job. 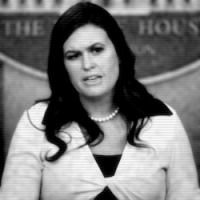 Perhaps it is a difference of cognizance. Some will rail against criticism or even criminal charges because they must, despite their culpability. There are those, however, who will never understand why their culpability is culpability. If we recall a time not so long ago during which conservatives fixated on the proposition of “sincerely held beliefs” entitling exemption to obligations under law—e.g., discrimination in bakeries, hospitals, &c.—then we might propose, in the moment, to witness what we might otherwise hope is the crest of that wave: Can we imagine Sarah Huckabee Sanders attempting to hold out under scrutiny from the Mueller investigation, according to sincerely held beliefs in alternative facts?

At some point, someone in the #trumpswindle is going to throw down explicitly that, certainly, they said this and did this other thing but it’s not illegal because they say so.

At what point does it occur to these people that, yes, they really can get in trouble for what they are doing? How many will recognize the danger before Mueller calls them in? How many will never understand why this is happening to them?