You know how every once in a while, someone for some reason decides to remind you that this or that isn’t natural? You know, gay sex, a man wearing a skirt, women with unshaved legs and no man on top of her … yeah. Anyway:

So if I tell you that Marti Jonjak’s article for The Stranger, on “Whores of the Animal Kingdom” only goes downhill from there, well, right.

Then again, that’s probably what makes it worth reading, and why you should keep the link at hand to deliver unto the next person ejaculating that stuff about what is and isn’t “natural”. 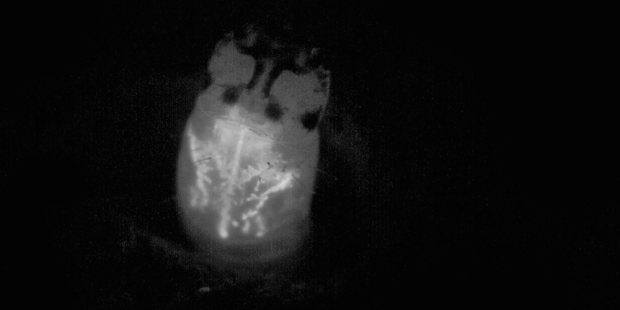 “It’s not often you see a wall full of glowing predators.”

Start your day the creepy way.

Sounds good. It rhymes. It’s not quite eight-thirty in the morning, and the coffee hasn’t kicked in, so silly rhymes work. Still, though, creepy is as creepy does, and it probably isn’t fair to call it creepy just because it’s a creeping, crawling, burrowing, predatory bit of nature that just happens to glow with a bioluminescence that allows us to see the internal organs lighting up.

Can we call that creepy? You know, without maligning nature? Then again, maybe we can blame Aaron Pomerantz of Tambopata Research Center. Really, what part of the idea of “a wall full of glowing predators” isn’t creepy?

Or maybe Gwen Pearson isn’t helping anything by her comparison:

The greenish worms are the larval form of a click beetle, and their glow seems to have one function: attracting prey. The larvae are more like a Tremors graboid than a Star Wars saarlac: hiding out in little tunnels with just their glowing head sticking out, their jaws are spread wide open. When a hapless insect is attracted to the light and blunders into their lair, the jaws snap shut. The glow seems to function only to attract prey, not for protection. In fact, once disturbed, the lights go out. Pomerantz said “they just sort of shut off once we pulled them out.”