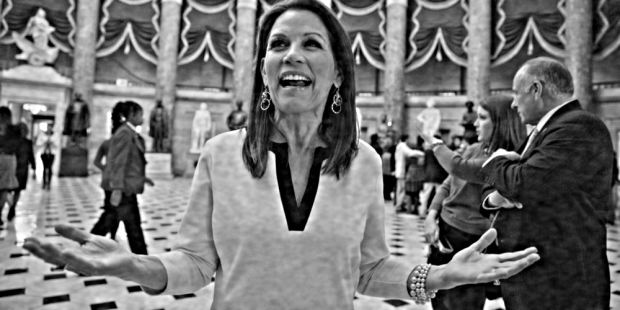 The Bach is back.

Indeed, if Michele Bachmann is aiming for a new hit, perhaps recycling her old clearance-bin favorites isn’t the best of ideas.

Appearing on Understanding the Times with Janet Markell, Bachmann, who spent much of her political career heaving anti-gay rhetoric, denounced President Barack Obama’s “dangerous policies,” which she claimed have angered God.

“When we raise our fist to a holy God and say that we are going to redefine marriage, we are going to be okay with paying a Planned Parenthood to cut up innocent baby parts and sell them for research, that clearly is a problem,” Bachmann said. “And we have seen God render judgment in the days of Noah, in the days of Sodom and Gomorrah and so forth throughout history. What the prophets have told every generation is that there is a just God and the people must repent and turn to him. So too in this day of wickedness in our own culture, we need to do the same. We need to repent, and we need to confess because a holy Savior is coming to save us and redeem us from this sin-sick world.”

Markell agreed, saying that the pair could witness “the Lord’s literal return even before we finish this broadcast.”

Maybe the problem is that Bachmann wasn’t clear enough last time, when she said God would remove his “hedge of protection” over the United States, “and we will suffer the consequences as a result”.

Then again, we might also wonder at the strange phenomenon in which faith in the Almighty and American patriotism alike depict a God and nation so horrible.

Think about it this way: This is the same brand of “Christian” faith that bawls about the lack of patriotism in a black preacher complaining of racial discrimination, but rallies around white Christians celebrating a murderous God who will destroy America because we’re not being mean enough to gays and women.

There are so many things going on, here.

In a radio interview last week, Bachmann, the former Minnesota Republican congresswoman, told “End Times” host Jan Markell, “We need to realize how close this clock is getting to the midnight hour.”

“We in our lifetimes potentially could see Jesus Christ returning to earth and the rapture of the church,” Bachmann said. “We see the destruction, but this was a destruction that was foretold.”

Bachmann cited the Obama administration’s nuclear negotiations with Iran as a cause. The U.S. and five partner nations are discussing a deal with Iran that would prevent the country from developing or obtaining nuclear weapons.

“We are literally watching, month by month, the speed move up to a level we’ve never seen before with these events,” Bachmann said. “Barack Obama is intent. It is his number one goal to ensure that Iran has a nuclear weapon.”