So, gentlemen … the note from Rich Smith of The Stranger is required reading:

If you’re anything like me, you think of Planned Parenthood as a giant women’s restroom. No boyz allowed. It’s some kind of sacred vagina temple where mystic labia wizards lay their hands upon pregnant women and pass on the ancient tales of womanhood.

But it turns out that’s all crazytalk. Planned Parenthood is for men, too. They do dude stuff. And they do it cheap.

END_OF_DOCUMENT_TOKEN_TO_BE_REPLACED

“It strikes me as extremely odd that you have a dermatologist, an audiologist, a dentist who are billing for family planning services.”

And, yet, the hidden jewel is one you might overlook if you’re not careful. Molly Redden of Mother Jones tops His Honor, wondering the obvious: “They know vagina dentata is a myth, right?”

It’s a fair question, given the Louisiana proposal to do away with Planned Parenthood in the Pelican State and expect other providers to pick up the load.

END_OF_DOCUMENT_TOKEN_TO_BE_REPLACED

In truth, I can’t believe it took me this long. You know, as if I really need an excuse for a plague song.

END_OF_DOCUMENT_TOKEN_TO_BE_REPLACED

There are days, you know, when it is really easy to pick on an idea. Take Oklahoma for instance. Last week we learned about the strangeness of Oklahoma virtue, and then a spokesman for Gov. Mary Fallin (R) found himself blaming Texas for protests in Durant and Oklahoma City demonstrating support for the Confederacy as President Obama arrived.

Talk about a trifecta; this also happened:

Gov. Mary Fallin (R) and the GOP-led legislature announced they’re prepared to ignore the state Supreme Court, at least for now, while they consider new solutions.​

The Republican governor talked to reporters, saying roughly what you’d expect her to say: she’s “disappointed” with the court’s decision; she thinks they made the wrong call; etc. But as KFOR, the NBC affiliate in Oklahoma City, reported, Fallin added one related thought that wasn’t expected at all:​

Gov. Fallin said she believes the final decision on the monument’s fate should rest with the people.​

“You know, there are three branches of our government. You have the Supreme Court, the legislative branch and the people, the people and their ability to vote. So I’m hoping that we can address this issue in the legislative session and let the people of Oklahoma decide,” she said.​

The KFOR report added, “Despite what the governor said, the three branches of government include the legislative, executive and judicial branches” ....​

.... We can certainly hope that Fallin, a former multi-term member of Congress, knows what the three branches of government are. Indeed, in Oklahoma, she’s the head of one of them – the one she left out this week.​

This is actually one of the big differences. Look, Democrats might well be just as middling, mincing, and incompetent as they seem, but, to the one, to the one, it’s nothing comparable to this, and, to the other, ritual equivocation would only obscure important considerations.

END_OF_DOCUMENT_TOKEN_TO_BE_REPLACED

This is the only thing you need to know about the spectacular awfulness accused of former House Speaker Dennis Hastert:

Jolene said she asked her brother why he never told anyone. “And he just turned around and kind of looked at me and said, ‘Who is ever going to believe me?'”

And never includes the time before Mr. Hastert rose to lead the United States House of Representatives.

There will be continued scorn toward hypocrisy and his role in American sexual moralism, and when it comes to spectacular headlines accusing that a former Speaker of the House of Representatives is a serial sexual predator, there are certain things that might get lost along the way.

Jolene said she believes the abuse ended when Steve moved away after his high school graduation in 1971. Reinboldt died of AIDS in 1995. She believes Hastert’s alleged actions irrevocably changed Steve’s life for the worse.

This is what it does. This is why it cannot be.

“And he just turned around and kind of looked at me and said, ‘Who is ever going to believe me?'”

And that is every day in these United States.

This is an awful scandal. It will be spectacularly horrible. But there are things about this story that were true and important before it ever happened, remain so now, and will continue as such after the headlines have passed.

And those things require address.

So, you know, if there’s one thing to remember from all of this, we should probably make it the really, really important one.

Image note: Detail ― U.S. Speaker of the House Dennis Hastert (R-IL) leaves the House Republican Conference leadership elections alone on Capitol Hill November 17, 2006 in Washington, DC. Hastert is the longest-serving Speaker of the House but is now scorned for losing control of the House to the Democrats in the 2006 midterm elections. (Photo by Chip Somodevilla/Getty Images)

The largest group of internal medicine doctors in the U.S. came out Monday in support of policies it says will improve the health of the country’s lesbian, gay, bisexual and transgender (LGBT) people.

Those policies include support for civil marriage rights for same-sex couples, opposition to so-called conversion or reparative therapy and support for health insurance plans that include comprehensive transgender healthcare services.

“The LGBT community deserves the same high quality care that any community in the United States should be getting, but may not be getting,” said Dr. Wayne J. Riley, president of the American College of Physicians.

This is the challenge: Prevention and risk identification. The Reuters report notes, for instance, that among the estimated 1.1 million HIV cases in the United States, one in six is not yet diagnosed. And think about that for a moment; that nearly seventeen percent works out to nearly one hundred eighty-four thousand people with unknown transmission potential likely in high risk profiles.

And this is a problem. First and foremost, doctors need to know these patients in order to help. But as a practical concern, this number also represents a tremendous gateway for potential further undiagnosed exposure, transmission, and contraction. Both individual and public health are at risk.

END_OF_DOCUMENT_TOKEN_TO_BE_REPLACED

This is a look ahead, toward some difficult times.

On Tuesday, Mike Huckabee made it official. The former Republican Arkansas governor and Fox News host launched his second bid for the White House in his hometown of Hope, Arkansas, vowing to stop the “slaughter” of abortion and calling for the protection of the “laws of nature” from the “the false God of judicial supremacy.”

Tim Murphy reports, for Mother Jones, the “Mike Huckabee you may not remember”, and it’s just as foul a history as you might imagine.

Huckabee, then a Baptist pastor who operated a small television station out of his Arkadelphia church, made sex and morality the centerpieces of his ’92 campaign—and he preached as fiery a message from the stump as he did from the pulpit. The novice politician let loose with eyebrow-raising tirades that occasionally put him to the right of the most fire-breathing conservatives. He endorsed quarantining AIDS patients, condemned efforts to shield homosexuals from discrimination, and called for the death penalty to be imposed on big-time drug dealers. He attacked Bumpers repeatedly as a libertine who supposedly supported giving condoms to 12-year-olds, sanctioned gay throuples, and voted to use taxpayer funds on “pornographic” art.

Huckabee’s 1992 platform was an artifact of the Moral Majority’s high-water mark. In interviews and on the stump he explained that the nation had strayed toward “selfishness and sensuality” and had been “savaged by radical groups bent on a moral and social agenda” at odds with Judeo-Christian values. “When I was in school, they passed out Gideon Bibles—today, they pass out condoms,” he said at stop after stop on the trail. In the new liberal order, Huckabee warned his hometown paper, the Hope Star, a family would consist of “three homosexual men living together.”

The gay agenda, he believed, was influencing and restricting the nation’s response to the AIDS crisis. He endorsed quarantining AIDS patients from the rest of society—a radical view even among conservatives at the time—while arguing that the severity of the epidemic had been exaggerated because gay people wielded so much political clout. The federal government should spend less money on AIDS, he insisted, and more on diseases that the afflicted had not brought on themselves, such as cancer.

“I realize a lot of people have received AIDS through blood transfusions, but AIDS is basically a lifestyle disease, and when the lifestyle is changed, the disease risk goes significantly down,” Huckabee said in one interview. AIDS advocates themselves, not taxpayers, should pony up: “Elizabeth Taylor went before Congress and made a big pitch that we needed more federal funding for AIDS. If Elizabeth Taylor would take one of the rings off her finger and sell it, she could get more money for AIDS research than the average Arkansan will make in two years of hard work. If she’s really serious about it, she’s got assets that she could dispose of. Why should she make me take money from my children’s future, and take it right off my table when she needs to cough up some of her own coin for that.”

It is worth noting that in this time when American Christians lament that they are, in various ways, under some sort of siege―from gays, women, television, even basic reality―it probably won’t help anyone to have so many Republican candidates rushing to proclaim hatred in Jesus’ name.

END_OF_DOCUMENT_TOKEN_TO_BE_REPLACED 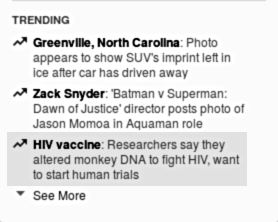 Actually, we might take the moment to simply chuckle at the idea. After all, it’s for a good cause, not some supervillain idea that involves friggin’ laser beams coming from their friggin’ heads.

What you’re looking at is familiar enough, though. It is that Facebook sidebar widget, and this is the news it brought on 19 February 2015, around 23:40 PST.

We’ll try to be serious about the content … er … um … later.

For now, just enjoy the prospect that mutant monkeys will save us all.

Rachel Maddow’s nearly giddy segment on msnbc last night noted that when the full effect of yesterday’s Supreme Court rejection of appeals against marriage equality reaches the states, the roster will equal thirty states. And she looked forward to decisions expected from the Sixth and Ninth.

Today, the hammer dropped in the Ninth; Dale Carpenter quips:

I haven’t read the Ninth Circuit opinion yet. I have to teach now, so it would be nice if the courts would stop issuing gay-marriage decisions for an hour or so.

The estimable Lyle Denniston of SCOTUSblog explains what happened in the Ninth:

The Ninth Circuit’s ruling was made up of three parts.

First, all three judges on the panel joined in an opinion by Circuit Judge Stephen Reinhardt finding that the Idaho and Nevada bans violate the constitutional guarantee of same-sex couples to be treated the same legally as opposite-sex couples. Second, Judge Reinhardt issued a separate opinion, for himself only, saying he would also strike down those bans under the Constitution’s Due Process Clause, arguing that the right to marry is a fundamental guarantee and that gays and lesbians have a right to share in that right. Third, Circuit Judge Marsha S. Berzon, in a separate opinion only for herself, said she would have also struck down the bans on the premise that they discriminate on the basis of gender.