Via Heard on the Hill (Roll Call):

There is nothing about Niels Lesniewski’s report for Roll Call that isn’t sad. While we already know American politics is a strange country, but consider the state of the Republican primary for the Kansas U.S. Senate race:

One is a suburb of the national’s capital. The other is just a few miles from Leavenworth. But a tea party group based in the suburbs of Washington, D.C., wants to host a Kansas Senate primary debate, and the long-shot challenger has already accepted the invitation.

A group known as the Northern Virginia Tea Party is offering to host a debate between veteran Sen. Pat Roberts, R-Kan., and challenger Milton Wolf. Wolf may be best known to HOH readers as a distant relative of President Barack Obama.

Wolf, a radiologist, has fire for, among other things, posting patient x-ray images on Facebook ….

…. Of course, the invite’s an attempt to get some publicity for residency questions for Roberts that gained attention from a New York Times report back in February.

It is almost enough to feel sorry for Kansans. To the one, they have a distant cousin of President Obama trying to use that association to give credibility to his opposition to the White House. But he’s also an unethical radiologist, which could easily be exploited for an attack about what kind of person so pointedly opposes President Obama. To the other, a career politician who is so ensconced in the Beltway culture that it is hard for Kansans to figure out if he even lives in the state.

There comes a point, after all, where we must accept the fact that the people of Kansas did this to themselves.

While thanking supporter Miles Wobbleton for contributing the 100,000th “thumbs up” on his official Senate Facebook page, the Kentucky Republican indicated that he wants to see his online flock grow exponentially.

“We’re excited to be at 100,000, but really we’d like to see it at a million,” Paul proposed, tossing out that familiar Washington enticement—the proverbial “free lunch”—to those still on the fence about registering their virtual approval.

Paul has already crossed that self-imposed high bar on a mirror Facebook page.

And his personal account is so popular, prospective pals are now universally rebuffed.

“This person has reached the friend request limit and can’t accept any more,” Facebook warns.

I realize there’s a “Stand With Rand” crowd that’s convinced the Kentucky Republican is a visionary when it comes to limited government, and I understand that much of the media establishment is eager for us to perceive him as a serious and credible person. But Rand Paul decided to chat with Glenn Beck, and during the interview the senator raised the prospect of marriage-equality proponents asking, “Does it have to be humans?” 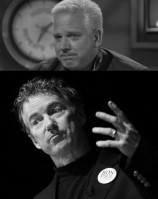 If this is what constitutes an “interesting” politician and “rising star” in Republican politics, the GOP is in dire straits, indeed.

There is a contingent of the population that’s desperately looking for a prominent political figure in Washington who celebrates civil liberties, is openly uncomfortable with the national security state, and opposes the rush towards more wars, especially in the Middle East.

But we’re frequently reminded why Rand Paul probably isn’t the champion these folks have been waiting for. He believes bizarre and unsettling conspiracy theories; he’s convinced the Obama administration is responsible for problems with his toilet; his concerns about armed drones are strikingly ignorant and contradictory; he considers fringe outlet like World Net Daily to be credible news organizations, and on the morning of a civil-rights breakthrough for LGBT Americans, he hangs out with Glenn Beck and raises the specter of bestiality.

Former Speaker Newt Gingrich doesn’t use his enduring clout to support just any old vanity project. But he will, apparently, go to bat for the chance to plaster an image of his platinum-tressed third wife, Callista, on a craft brew bottle.

At the moment, Callista Gingrich appears to be leading the field of exactly two applicants vying for the honor of being the next Drop Dead Blonde poster girl.

Strangely, I can’t find an Adulteress Ale*. Sounds like the market is begging.

I mean, really. There isn’t?

Okay, someone help me out. I must be overlooking something. I mean, if there was ever a beer that should have Callista Gingrich’s face on it ….

“Somehow, in the last few hours, Franni and I have already managed to spoil the baby,” Franken gushed May 31 in a release announcing the arrival of his extended brood.

The young Joseph clocked in at six pounds eleven, and Rojas notes that Thomasin is said to be in good shape.

But, yeah. You know.

Welcome, good Joseph. We’re so glad you made it.

Our best wishes to the growing Franken-Greenwald venture, and our greatest hopes for the latest partner.