In one important area, Pence has the advantage of being perceived as a mainstream pol. Politico published a piece yesterday that characterized tonight’s vice presidential debate as “Battle of the Normals,” and a “sane moment” in a campaign cycle that’s often seemed insane.

On a certain level, I can appreciate where analysis like this is coming from. As a matter of tone and temperament, Mike Pence is hardly scary: the governor is a mild-mannered, soft-spoken Midwesterner. Unlike the man at the top of the GOP ticket, no one would ever expect Pence to start tweeting at 3 a.m. about his disgust for a beauty-pageant contestant and encourage Americans to seek out a “sex tape.”

But to shift one’s focus from tone to policy is to see one of the most extremist politicians to seek national office in over a generation.

Steve Benen is not wrong. This has been a factor worth considering in recent years, and even more so this cycle. What counts as centrist or mainstream is, in American politics, a roving range. The msnbc blogger and producer continues:

About four years ago, Nate Silver published an interesting analysis of Paul Ryan, who’d just been named to Mitt Romney’s ticket. Nate wrote at the time, “Various statistical measures of Mr. Ryan peg him as being quite conservative. Based on his Congressional voting record, for instance, the statistical system DW-Nominate evaluates him as being roughly as conservative as Representative Michele Bachmann of Minnesota. By this measure, in fact, which rates members of the House and Senate throughout different time periods on a common ideology scale, Mr. Ryan is the most conservative Republican member of Congress to be picked for the vice-presidential slot since at least 1900.”

There are curious circumstances, now and again, in which the GOP hardliners leave me standing shoulder to shoulder with Republicans I generally wouldn’t get along with. George W. Bush on China, and suddenly I’m commiserating with Pat Buchanan? What was it, Jade Helm? How do Rick Perry and I land on the same side? I can tell you, though, that when Lindsey Graham is bagging points off John Kasich being described as a “moderate”, well, at least we have that much in common.

We revisit the question for Mike Pence. Benen notes the Indiana governor also has a record in Congress:

By the 110th Congress, Pence was at #432, putting him to the right of nearly everyone in the chamber. The results were roughly the same in the 111th Congress and the 112th.

Let’s put this another way: during his congressional career, Pence wasn’t just more conservative than Paul Ryan. His voting record also put him to the right of Michele Bachmann, Todd Akin, Steve King, and even Louie Gohmert. That’s not an exaggeration. Bachmann, Akin, King, and Gohmert all had voting records less extreme than Mike Pence.

The problem is the gap between perceptions of Mike Pence and his actual record. To use Politico’s phrasing, the Hoosier is seen as “normal” and “conventional.” But on a substantive level, we’re talking about a politician whose claim to fame is an anti-LGBT law that did real harm to his state. Pence is a climate denier. He rejects the idea that cigarettes are deadly. He doesn’t believe in evolutionary biology, but he does support “conversion therapy.”

There was an embarrassing episode having to do with alleged Iraqi WMDs; something about privatizing Social Security not being conservative enough; something about government shutdowns; oh, right, and some manner of conspiracy theory about Disney film and women in the military.

Unfortunately, that last isn’t a joke.

This is the problem: If Gov. Mike Pence is “normal”, then we might pause to consider how we define normalcy.

Cruelty is an American virtue, and nowhere is it more exhaustively celebrated than in our political discourse; which, in turn, kind of makes sense and explains why we not only tolerate such vice but encourage and even demand it. Oh, hell, let’s just run with the explanation from DeadState:

Just before Ted Cruz’s announcement today that he’s running for president, he sent out a cryptic message on Twitter that seemed to forebode the event.

Almost immediately, the folks on Twitter cobbled together the hashtag #TedCruzCampaignSlogans, and it was all downhill from there. Mocking Cruz with everything from suggested campaign slogans to referencing his birthplace in Canada, the onslaught was relentless.

And, of course, the thrashing ranged from policy to stupidity and even on to aesthetics:

• “The wisdom of Bush, the fearmongering of Cheney, the ideology of Rand Paul, and the face of the drama mask.”

• “An ocean in every house and a probe in every woman.”

• “Just in case Rand Paul wasn’t crazy enough for you.”

Right. Pick your favorites. Grimace at the tasteless ones. Let it be.

That is to say, yeah, sure, it’s kind of fun to make these jokes, but there is no alternate campaign slogan we might invent that will surpass the sublimely vicious humor inherent in the idea that Ted Cruz thinks he can be president.

U.S. Senator Ted Cruz, a Republican from Texas, speaks at the Heritage Foundation in Washington, D.C., U.S., on Wednesday, Oct. 30, 2013. Cruz was scheduled to speak on the scope of treaty power in the U.S. Constitution. Photographer: Pete Marovich/Bloomberg via Getty Images. 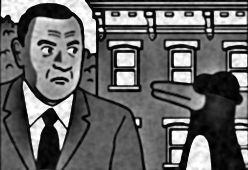 Don’t blame the cartoonist; sometimes the stranger-than factor comes into play, and there really is no punch line that isn’t depressing.

“But never have I met any candidate quite as frightening or fact-averse as Louisiana state Rep. Lenar Whitney, 55, who visited my office last Wednesday. It’s tough to decide which party’s worst nightmare she would be.”

It is not, by the logic of conventional wisdom, a good thing when the candidate actually frightens the Cook Political Report editor, but down Lou’siana way perhaps the Palin of the South and voters in Terrebonne Parish see it differently.

And let us be clear—”Palin of the South” is not an insult, regardless of however hilarious or horrifying or redundant others might find the phrase.

As a House analyst for the nonpartisan Cook Political Report, I’ve personally interviewed over 300 congressional candidates over the course of seven years, both to get to know them and evaluate their chances of winning. I’ve been impressed by just as many Republicans as Democrats, and underwhelmed by equal numbers, too. Most are accustomed to tough questions.

But never have I met any candidate quite as frightening or fact-averse as Louisiana state Rep. Lenar Whitney, 55, who visited my office last Wednesday. It’s tough to decide which party’s worst nightmare she would be.

Then again, as bad reviews go, that one is pretty impressive.

END_OF_DOCUMENT_TOKEN_TO_BE_REPLACED

re: A brief word of advice

It’s over, Governor. Your side lost. Get used to it.

The Texas Republican Party this month adopted a platform supporting access to “reparative therapy” for gays and lesbians, a widely discredited process intended to change sexual orientation. In response to an audience question about it Wednesday night, Perry said he did not know whether the therapy worked.

Commonwealth Club interviewer Greg Dalton then asked him whether he believes homosexuality is a disorder.

“Whether or not you feel compelled to follow a particular lifestyle or not, you have the ability to decide not to do that,” Perry said. “I may have the genetic coding that I’m inclined to be an alcoholic, but I have the desire not to do that, and I look at the homosexual issue the same way.”