President Donald Trump’s former chief strategist Steve Bannon will be interviewed next week by a U.S. House of Representatives committee investigating alleged Russian interference in the 2016 U.S. election, a person familiar with the matter said on Thursday.

The interview behind closed doors on Tuesday with the House Intelligence Committee will focus on Bannon’s time on the campaign, not the transition or his time in the White House, the source said. 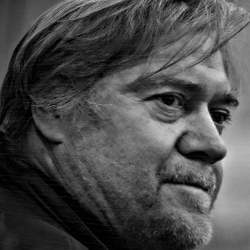 —but the news from Reuters reporters Karen Freifeld and Patricia Zengerle can also sound like the start of something, well, if not good then at least spectacular.

To the other, this is Steve Bannon, and if he can tell news consumers precisely what they want to hear, he can tell politicians exactly what needs to in order that the Beltway should rupture into flaming panic.