Much ado is or not, but something about a block of paragraphs from Reuters rings a bell:

Trump and Merkel shook hands when she arrived at the White House but did not do so in the Oval Office where she frequently leaned towards him while he stared straight ahead, sitting with his legs apart and hands together. In the Oval Office both leaders described their meeting in brief remarks to reporters as having been very good.

She began her remarks at the news conference by saying it was better to speak to each other than about each other.

“We held a conversation where we were trying to address also those areas where we disagree, but we tried to bring people together … (and) tried to find a compromise that is good for both sides,” Merkel said.

They shook hands again at the end of the press conference and then exited the East Room together.

Honestly, I think we’ve seen this before. Something goes here about Vladimir Putin and a dog.

END_OF_DOCUMENT_TOKEN_TO_BE_REPLACED

“Kellyanne Conway continues to stress the importance of ‘disclosure’ and ‘transparency’ in the election, unaware of the irony.” 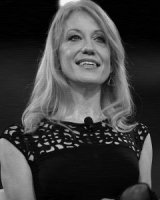 If we started counting up the various assertions by which customs, rules, and even laws just aren’t supposed to apply to Republicans, would it be fair to call the mountain we’ve watched pile up the whole time “shocking”?

Probably not. Then again, I do wonder if, like “locker room talk”, we will try to reckon with such behavior while pretending it isn’t or wasn’t widespread. After this is over, watch and listen as Republicans and journalists alike try to minimize just how deeply they dove down the Trump hole.

Trump undermines his rationale for not releasing his taxes

On Fox last night, Trump appeared to suggest that the audit isn’t the ONLY thing keeping him from releasing his tax returns.

Q: If Gov Pence releases his tax returns does that put pressure on you to release yours?

Trump: Not at all. Nobody cares about it except some of the folks in the media. Nobody cares about it. But just so you understand I’m under audit. A routine audit. And when the audits complete I’ll release my returns. I don’t know when that’s gonna be. But when the audits complete I will release my returns. I have no problem with it it doesn’t matter.

Q: But people say you can do it while being audited?

Trump: No one would recommend that. In the meantime she has 33,000 emails that she deleted. When is she going to release her emails? She probably knows how to find it. Let her release her emails, and I’ll release my tax returns immediately.

That last line―”Let her release her emails, and I’ll release my tax returns immediately”―undermines the audit argument. It implies the audit isn’t the real excuse.

The only surprise in that is the straightforward reporting of Donald Trump’s self-contradiction.

The Donald Trump phenomenon is admittedly a depressing spectacle to witness. Then again, not all of that sucking of souls is entirely on the candidate; a vampiric press must also answer; sometimes instead of simply toddling back and forth in search of sound bite, it seems useful to mark thresholds and declare an issue, well, if not over, then at least sufficiently defined:

Anthony Scaramucci, a New York financier who recently backed Trump, told Fox News that the real estate mogul’s reluctance is due to “the complication of the return, the fact that he’s under an audit, he feels that he doesn’t want to give out that information to the general public and have a whole nightmare situation with opposition research trying to pick holes through the return.”

Consider, please, that the argument put forth by a surrogate is essentially that the GOP frontrunner and presumptive nominee is afraid.

“… he feels that he doesn’t want to give out that information to the general public and have a whole nightmare situation with opposition research trying to pick holes through the return.”

Such are the dangers of surrogacy: Mr. Trump apparently does not want to release his tax returns because he is afraid to answer for what is in them.

END_OF_DOCUMENT_TOKEN_TO_BE_REPLACED

Texas Sen. Ted Cruz says he waited until January to begin criticizing Republican rival Donald Trump because he didn’t want to become “roadkill” like other candidates who had challenged the front-runner.

Cruz made the comment Wednesday during a forum hosted by a conservative talk radio host near Milwaukee. It marked Cruz’s first campaign stop in Wisconsin, which holds its primary April 5.

Cruz was asked about a previous statement he made calling Trump “terrific.” Cruz responded by noting that his campaign has had a plan since launching a year ago, and said he needed to build his base of support first and get his record out before drawing contrasts with Trump.

This is the guy who wants us to “trusTed”.

Which, in turn, begs a simple question: Why not?