Miserable: Jonathan Swan offers a glimpse “Inside Scott Pruitt’s ‘miserable’ bunker”, and what is unbelievable about the article is that it might be written at all. Starting with the incendiary report from The Atlantic about intracabinet political attacks and the typical Axios brief on “why this matters”—approximately that for whatever reasons, Administrator Pruitt still has his job—but then lays an ugly string of points from “behind the scenes”, starting with the idea that EPA senior staff apparently being surprised by a photo of the Administrator at lunch with “members of his team” emerging in a lobbyist’s tweet.

Gravity is gravity; the slope is uncertain, but something about downhill goes here.

• Over the last few months, Pruitt has walled himself off from all but five EPA political appointees: ​Millan Hupp, Sarah Greenwalt, Hayley Ford, Lincoln Ferguson, and Wilcox. Of those five, only Wilcox is over 30. Hupp, Greenwalt and Ferguson came with Pruitt from Oklahoma. Wilcox is the only press aide Pruitt appears to trust.

• Pruitt’s chief of staff, Ryan Jackson, runs the agency’s operations but rarely knows where his boss is. Pruitt has frozen Jackson out of his inner circle—a disaster for a chief of staff. Pruitt and Jackson don’t trust each other, multiple sources told me.

• “All of us have been frozen out over time,” one EPA political appointee told me. “It’s absolutely unreal working here. Everyone’s miserable. Nobody talks. It’s a dry wall prison.”

And the band plays on as EPA tumbles down the rabbit hole: “Pruitt never trusted the EPA’s career staff”, writes Swan, and the understatement about the sentence is nearly unavoidable; the point is highlight the Administrator having “frozen out” political appointees as administrative paranoia apparently grows and staff morale similarly continues its plummet.

END_OF_DOCUMENT_TOKEN_TO_BE_REPLACED

While the idea of a rioting dumpster fire experienced brief vogue among media commentators trying to describe the Donald Trump presidency, the slowburning, filthy corruption of EPA Administrator Scott Pruitt seems to describe something akin to a peat fire. The lede from the New York Times:

Since moving to Washington, Scott Pruitt, the head of the Environmental Protection Agency, has attracted the attention of federal investigators because of his unusual association with lobbyists, including his rental of a condominium last year owned by the wife of a lobbyist with business before the E.P.A.

As a state senator in Oklahoma 15 years ago, Mr. Pruitt went even further: He bought a home in the state capital with a registered lobbyist who was pushing for changes to the state’s workers’ compensation rules—changes that Mr. Pruitt championed in the legislature.

And as with the condominium rental in Washington, Mr. Pruitt never publicly disclosed his financial relationship with the lobbyist, who, like Mr. Pruitt, lived in the home when in Oklahoma City on business. 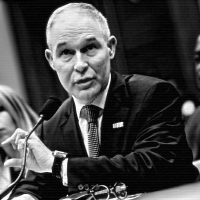 But if for some reason the Pruitt Watch seems frustrating, or even verges toward incomprehensible, perhaps the striking report from The Atlantic suggests a flashpoint:

As Environmental Protection Agency Administrator Scott Pruitt faces a seemingly endless stream of scandal, his team is scrambling to divert the spotlight to Interior Secretary Ryan Zinke. And the White House isn’t happy about it.:

In the last week, a member of Pruitt’s press team, Michael Abboud, has been shopping negative stories about Zinke to multiple outlets, according to two sources with direct knowledge of the efforts, as well as correspondence reviewed by The Atlantic.

“This did not happen, and it’s categorically false,” EPA spokesman Jahan Wilcox said.

To the other, an unnamed White House official claiming knowledge of the situation explained: “Absolutely nothing Scott Pruitt did would surprise me.” And, yes, that last might as well include, the prospect of the EPA Administrator simply persisting and enduring, though the article did not.

END_OF_DOCUMENT_TOKEN_TO_BE_REPLACED

Ital Vardi brings this wonderful bit of news for the Huffington Post:

Interior Secretary Ryan Zinke is a shareholder in a private Montana company that manufactures and sells firearms and advanced weapons materials, a financial interest he did not disclose when nominated last year.

In response to inquiries from HuffPost, both Zinke and the company, PROOF Research Inc., confirmed the secretary’s holdings, though the dollar value placed on them varied. This previously undisclosed holding comes to light after numerous decisions in his first year in office that benefited the hunting and gun industries.

PROOF Research Inc. was first established in 2011 in Zinke’s hometown of Whitefish, Montana, under the name Extreme Precision Armaments Inc., according to state of Montana business records. The company specializes in the production of lightweight rifles with high-precision carbon fiber barrels for hunting and military applications and was born as a merger of four smaller firearms and gun parts companies. It later changed its name to PROOF Research Inc. and moved to the nearby town of Columbia Falls.

According to the company’s website, its facility in Columbia Falls produces “the world’s finest composite barrels, stocks, and complete rifles.” A second facility in Dayton, Ohio, makes specialized high-temperature composite materials for the aerospace and defense industries, including components for the F-35 Joint Strike Fighter and B-2 stealth bomber.

Obvious questions present themselves, but there is also something inherently clownish about the brazen stupidity of the omission, and given everything else, Steve Benen’s point last week, that the “Interior Secretary can’t seem to stay out of trouble”, resonates anew. There is also some impulse to raise an eyebrow at the seeming strangeness of a small firearms firm with such specialized defense-industry pedigree.

END_OF_DOCUMENT_TOKEN_TO_BE_REPLACED

This is unsurprising, though perhaps saying so risks overstating the point. Via Washington Post:

The EPA inspector general’s office announced in August that it had opened an inquiry into Pruitt’s frequent travel to his home state of Oklahoma. The internal watchdog at the time said its investigation was triggered by “congressional requests and a hotline complaint, all of which expressed concerns about Administrator Pruitt’s travel—primarily his frequent travel to and from his home state of Oklahoma at taxpayer expense.”

The probe was triggered in part by findings from the Environmental Integrity Project, a nonprofit group that detailed through public records that Pruitt had spent nearly half of the days in March, April and May in Oklahoma. Initially, EPA investigators said they planned to audit Pruitt’s travel records, as well as those of his security and top aides, through the end of July.

But on Friday, the inspector general’s office said it would expand that inquiry to include all of Pruitt’s travel through the end of September, and not just trips to Oklahoma.