I assume Cruz knows this, but the more he talks about ‘mandatory gay marriage,’ the more I’m inclined to remind him that he probably means ‘voluntary gay marriage.’

This is what we call E for Effort, but don’t let that be a dig; it really is difficult to make heads or tails of what conservatives mean. This is sort of a confusing issue for them, and it seems that is how they like it.

Well, other than the obvious, which is to wonder what the hell these people are talking about.

The only “mandatory” aspect of this is that the notion that the law would be required to treat all Americans equally. It would be “mandatory” that there are no second-class citizens.

This is what we must remember, though: The confusion is the point.

It is just harder to sell the fear of “mandatory gay marriage” if people take the mandate for what it really is: You got married, so now you’re married. 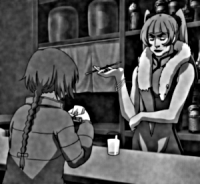 It is not that this is somehow hard for conservatives to understand; rather, they need it to seem hard to understand. The only confusion is that which they pretend, or, as some circumstances might have it―Same-Sex Attracted Men and Their Wives amici, I’m looking in your direction―actually genuinely suffer for whatever deceptions they have inflicted upon themselves.

This sort of seemingly incomprehensible incomprehension is actually pretty straightforward, depending on how deeply one wishes to delve. It is ego defense, nothing more, nothing less. They don’t like what is mandatory, but it is kind of inherently mandatory. So they need the idea of what is mandatory to be kind of scary. So they pretend to be kind of confused about what is mandatory, and then they manage to confuse themselves. This is actually something people do to themselves quite regularly, regardless of political orientation.

In the question of the Republican Party and its desperate, evangelical wing, there does remain a question as to whether or not such failures of healthy psychological function should present themselves as so consuming. That is to say, sure, it’s one thing to have one’s dysfunctional moments, but shouldn’t your part in the public discourse have something more to it than just a neurotic tumbleweed?

Image note: Top―Sen. Ted Cruz during the Reuters Washington Summit, 24 October 2013 (Photo: Jim Bourg/Reuters) Left―”You don’t want the ark to sink.” Lebanon gives some advice to Suou. Detail of frame from Darker Than Black: Gemini of the Meteor, episode 4, “The Ark Adrift on the Lake”.

This is something really quite genuinely incredible. The “Brief of Amici Curiae Same-Sex Attracted Men and Their Wives in Support of Respondents & Affirmance”, authored by one Darrin K. Johns, a Utah Attorney, defies general description. For those given to such myths as the seriousness and gravity of jurisprudence, the proposition that any court, much less the Supreme Court of the United States, ought be expected to endure such frivolity and, ultimately, self-harm as this brief constitutes might bring something of a shock. And no, it is not supposed to be this way.

It is also worth noting that the brief opens with quotes from three of the amici couples. The seven paragraphs that follow establish the interest of the amici; keep that in mind. END_OF_DOCUMENT_TOKEN_TO_BE_REPLACED