“I promise you that we will be united against any Supreme Court nominee that Hillary Clinton, if she were president, would put up.”

It’s not really a gaffe, is it? It’s an interesting headline from CNN: “John McCain: ‘I don’t know’ if Trump will be better for Supreme Court than Clinton”

Trump has released lists of 21 potential justices. He has pledged to choose from among those 21 when making Supreme Court selections, in a move that has earned him praise from conservatives, including his former rival in the Republican primary, Texas Sen. Ted Cruz. 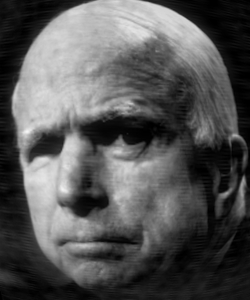 Asked on the Dom Giordano program on 1210 WPHT Philadelphia radio whether Trump was the superior candidate on issues like the Supreme Court, the Arizona senator replied, “Uh, first of all, I don’t know, because I hear him saying a lot of different things.”

Later in the interview, McCain used the opportunity to make the case for fellow Republican Sen. Pat Toomey, who is locked in a close battle to retain his Senate seat in Pennsylvania. McCain promised that Republicans would be “united against any Supreme Court nominee” put forth by Clinton.

“I promise you that we will be united against any Supreme Court nominee that Hillary Clinton, if she were president, would put up,” McCain said. “I promise you. This is where we need the majority and Pat Toomey is probably as articulate and effective on the floor of the Senate as anyone I have encountered.”

Or, as Taylor Link fashioned the obvious lede for Salon:

Sen. John McCain is sure that if Democratic presidential nominee Hillary Clinton wins, the Senate will continue to be an obstructionist mess.

In a Monday interview, the senator from Arizona said that Republican nominee Donald Trump is not necessarily a better candidate than Hillary Clinton when it comes to appointing Supreme Court justices and “promised” that Republicans wouldn’t approve any Clinton nominee to the Supreme Court.

Couldn’t see that one coming, eh?