"I'm not associated with Gamer Gate," The Ebola Virus stressed at a press conference earlier today.

Meanwhile, in other news about the #GamerGate terror movement, we might look to The Stranger, an alternative tabloid newspaper in Seattle, where an anonymous contributor to the weekly column, “I, Anonymous”, asks the obvious question:

Who the fuck calls in a bomb threat at GeekGirlCon?

The rest of the rant is worth a read.

And in case you might be wondering what GeekGirlCon means, you can always check out their website. Or perhaps peruse Nicole Dieker’s review of this year’s event. Meanwhile, the countdown is on. 351 days until GGC’15.

To the other, if you’re wondering what #GamerGate means, Clickhole recently attempted to explain the issue to readers, and, frankly, we’ve a couple of bits in our own archive. But setting aside our own egos, the Clickhole version is the least stomach-churning explanation for what’s going on.

The bottom line, though, is that Jack-o’Dantern, being a masculine-sounding name, is in pretty good shape when it comes to cracking wise about #GamerGate. So are we at This Is. That is to say, we’re men. And #GamerGate, as much as they like threatening to rape women to death, is afraid to fight with other men. Presently, the best guess is that their delusions include some manner of belief that other men support them. And why not? So far, the software industry has been pretty quiet; it would be bad for business to piss off gamers.

Dieker, Nicole. “GeekGirlCon is an oasis of acceptance”. BoingBoing. 21 October, 2014.

“A Summary Of The Gamergate Movement That We Will Immediately Change If Any Of Its Members Find Any Details Objectionable”. Clickhole. 22 October 2014.

Stuart, Keith. “Brianna Wu and the human cost of Gamergate: ‘every woman I know in the industry is scared'”. The Guardian 17 October 2014. 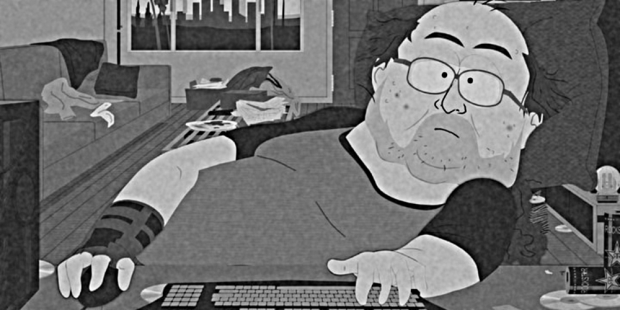 It is not necessarily the normal course for a stereotype. You know the one, about gamers and tech-heads being zit-faced, overweight, lonely guys in their mothers’ basements, and all that.

That is to say, normally such people work to overcome those stereotypes. And often it is difficult. Even Bill Cosby will tell black people to whiten up.

And then there is GamerGate, a situation we referred to last month as (ahem!) “a pretty minor scandal”.

Now just work with me here, for a moment. Please.

This is a purely behavioral phenomenon. That is to say, we might recall those who would combat racism or sexism by undertaking racist and sexist rhetoric. You know, the old argument about how there are women, and then there are bitches; or there are black people, and then there are niggers. And it is tempting to tell people to not live down to bad stereotypes, but that’s the point. Bad behavior is bad behavior, and it really shouldn’t matter what color one’s skin is or what they have between their legs.

But this? Gaming is not quite the same as being black or female.

All of which is our own little preface; the real point here is that Brianna Wu has responded to threats against her life and the lives of her family:

This angry horde has been allowed to wage its misogynistic war without penalty for too long. It’s time for the video game industry to stop them.

Gamergate is ostensibly about journalistic ethics. Supporters say they want to address conflicts of interest between the people that make games and the people that support them. In reality, Gamergate is a group of gamers that are willing to destroy the women who have invaded their clubhouse.

The movement is not new. Two years ago, when Anita Sarkeesian tried to crowdfund a series of videos critiquing the hypersexualized female characters of video games, they threatened to kill and rape her. The movement reached fever pitch – and got its name — when a jilted former lover of indie game developer Zoe Quinn published transcripts of her life online. Gamers who were outraged over charges that Quinn’s game Depression Quest had received favorable reviews due to an alleged romantic relationship with a journalist, seized the opportunity to shame and terrify her into hiding. Now, Gamergate is a wildfire that threatens to consume the entire games industry.