This is an important rule:

• It is not always fair to blame a politician for the actions of supporters.

And this is the flip side:

• Sometimes it is exactly fair to blame a politician for actions of supporters.

But there is also this:

• This is the quality of mind that supports Donald Trump’s presidential candidacy.

Or, as Ryan J. Reilly explained yesterday for Huffington Post:

A fanatical Donald Trump supporter, who was arrested by the FBI in Oregon this week after repeatedly threatening to kill President Barack Obama and federal agents, had multiple pipe bombs in his home, authorities alleged in court on Friday.

In one Jan. 31 Facebook post cited by the FBI, [John Martin] Roos referred to agents as “pussies” and wrote he would “snipe them with hunting rifles everywhere.” (Despite his threats to kill members of law enforcement, he also complained on Facebook earlier this month about the “liberal media … slamming police.”) In a post in November that was also cited by the FBI, Roos spoke out against accepting refugees and threatened to kill Obama. 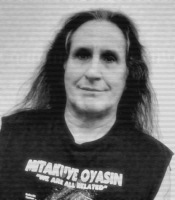 “Obama you goat fffing fudgepacker, the refugees are men of fighting age. Black lives matter! Sure we need someone to pick cotton and wash cars. Paris, burn diseased muslim neighborhoods to the ground and start over with human beings. Obama you are on a hit list,” he wrote in a post that appears to have been removed.

Beyond what was mentioned in the affidavit, Roos regularly posted on both Facebook and Twitter about his support for Trump and his hatred for Obama, who he called a “muslim faggot” and other derogatory terms. He indicated he wanted to kill Obama’s family and made other racist and sexist statements about Michelle Obama. He also made negative references to Attorney General Loretta Lynch, singer Beyonce, Fox News anchor Megyn Kelly and reporter Michelle Fields, and said he believed that the late Supreme Court Justice Antonin Scalia was killed by Obama. He praised Ann Coulter and Stacey Dash, and posted several links to posts on Breitbart.com.