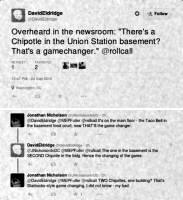 If you’ve ever wondered about the Beltway press, and, you know, let’s face it, no, most people just don’t wonder about the reporters who dig up the little bits and pieces destined to be overlooked in the infotainment synopsis that makes the evening news, well might be a reason you did.

David Eldridge: Overheard in the newsroom: “There’s a Chipotle in the Union Station basement? That’s a gamechanger.” @rollcall

David Eldridge: @JNicholsonInDC @MEPFuller @rollcall The one in the basement is the SECOND Chipotle in the bldg. Hence the changing of the game.

We might suspect there’s a reason Nicholson is trying to drag Matt Fuller into it.

Say what we will about the Beltway sausage grinder, but this is the daily grind. Still, though, these are the days of their lives.