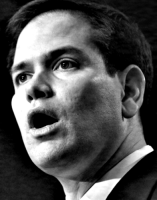 “Marco Rubio, again, looked like three small children stacked on each other’s shoulders wearing a suit. He spent much of the evening sparring with Ted Cruz over their respective positions on immigration. When he wasn’t doing that, he was repeating the same canned answers he gives to every question. Usually, a Rubio answer starts with an anecdote about his upbringing as the child of Cuban immigrants, then devolves into a blizzard of words that tickle the Republican g-spot―opportunity, America, great, unleash, America, capitalism, America―before his sentences just sort of meander into a nothingness of a point that lies flat on the ground, as if beaten into a coma by its own banality.”

Honestly, covering the GOP debates is a bit of an exercise in frustration featuring the latest culmination of a long habit―possibly a deliberate tactic, once upon a time―in which one packs so much wrongness into a political statement that critics don’t know where to begin. Gary Legum, for instance, offers a review that is ostensibly about the proposition that there arrived a moment in the CNN spectacle when it was “almost possible to like Rand Paul”.

Which, in turn, is a personal assessment; I might not get it, but that doesn’t mean Mr. Legum is wrong―in that moment when the Kentucky junior turned on the Governor of New Jersey apparently struck a chord.

But at the same time, the Salon article actually offers another point to consider: A Republican presidential debate occurred last night, and reading through the review the most profound response I can muster is to remember just how much I loathe the phrase, “That one moment when”.

I know, I know. Still, it’s the Republican presidential contest; we have every reason to pay attention, but at some point these candidates need to actually start running for president.

Legum, Gary. “The GOP debate’s weirdest twist: That one moment where it was almost possible to like Rand Paul”. Salon. 16 December 2015.