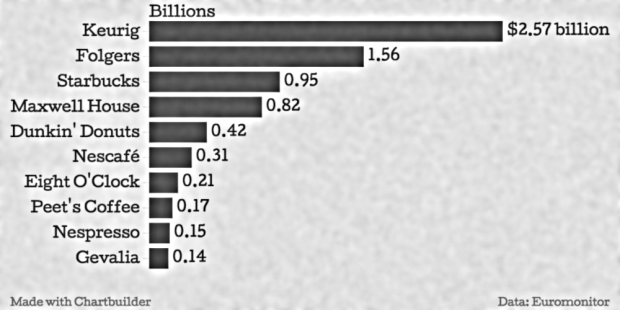 Living deep in the heart of the Starbucks Territory, we might suggest Roberto A. Ferdman’s entry for Wonkblog brings no surprise:

With upscale artisanal coffee brewers dotting city streets across the country, America might fancy itself a nation of high-end coffee drinkers.

But just the opposite is true: People in this country, on the whole, are actually drinking worse coffee today than they have in the past. And the reason appears to be that they value cheapness over quality — and convenience over everything. “A lot of people in America would take a sip of single origin high-end coffee and not appreciate the taste,” said Howard Telford, an industry analyst at market research firm Euromonitor.

We should at least take the moment to guard against misinterpretation. Ferdman notes―

Even as Starbucks continues to plant coffee shops around the country, other artisanal coffee businesses — chained or not — continue to grow in cities like New York, San Francisco and Los Angeles (think Blue Bottle, Stumptown and the like).

―which, in turn, might offer some the impression that Starbucks’ coffee is good. It is not.

Think of it this way: There is a reason McDonald’s is trying to compete with Starbucks with their “McCafe” branding and advertising. Starbucks is the McDonald’s of coffee.