This is all ritual, right?

When asked—three times—at a White House press briefing about Russia’s link to the poisoning or any possible repercussions for the country from the U.S., Sanders carefully did not say “Russia”—or otherwise address who may have been responsible for the attack. She characterized it as an “indiscriminate” attack, although British authorities have concluded that Skripal was clearly targeted. 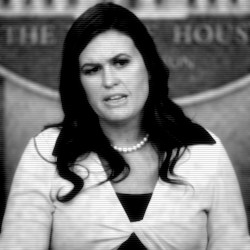 “We’ve been monitoring the incident closely, take it very seriously,” Sanders said. “The use of a highly lethal nerve agent against U.K. citizens on U.K. soil is an outrage. The attack was reckless, indiscriminate and irresponsible. We offer the fullest condemnation.”

“So you’re not saying that Russia was behind this?” a reporter asked.

“Right now, we are standing with our U.K. ally,” Sanders said again. “I think they’re still working through even some of the details of that.”

Pressed a third time, an annoyed Sanders answered, “Like I just said, we stand with our ally and we certainly fully support them and are ready if we can be of any assistance.”

That is, just to be clear: We put up with the lying farce that is the Trump administration every day according to some pretense that we all recognize what is happening and it ought to be over, eventually, when Mueller and the American Way of Truth and Justice finally come through.