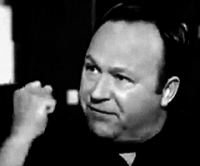 On the May 21 edition of The Alex Jones Show, a caller asked Jones whether he was planning to cover how government technology may be behind a recent spate of sinkholes. After laying out how insurance companies use weather modification to avoid having to pay ski resorts for lack of snow, Jones said that “of course there’s weather weapon stuff going on—we had floods in Texas like fifteen years ago, killed thirty-something people in one night. Turned out it was the Air Force” ….

…. According to Jones, this possibility hinges on whether people spotted helicopters and small aircraft “in and around the clouds, spraying and doing things.” He added, “if you saw that, you better bet your bottom dollar they did this, but who knows if they did. You know, that’s the thing, we don’t know.”

Now, I realize that fringe figures are going to share nutty ideas all the time, and it was probably inevitable that some nonsensical allegations about the Oklahoma tornado would pop up. I didn’t realize “weather weapons” would be part of the story, but there’s probably no reason to be surprised.

This caught my eye, however, because of recent developments—we’ve seen Republican officeholders in state legislatures, the U.S. House, and even the U.S. Senate take Alex Jones’ ideas seriously. Sen. Rand Paul (R-Ky.) intends to run for president—of the United States—and he’s been a guest on Alex Jones’ show.

In other words, the guy raising the specter of Obama using “weather weapons” to kill Oklahomans is the same guy helping influence several Republican policymakers in 2013.

And it’s a fair point, to be certain. Of course, it will be hard to top Pete Santilli’s sexual violence fantasy, but Jones is already syndicated, so he can take comfort in getting actual U.S. senators like Rand Paul, instead of whack-job nobodies like Ted Nugent and Larry Pratt.

Seriously, the weather machine is up and running?