Those who wonder why we should care about Khashoggi’s death should ask whether we want an autocratic thug to be directing US foreign policy? Why is America’s president covering up a brutal extra-territorial murder? All this whabboutery serves MBS. Is that what we want?

And this is an important question: All of President Trump’s equivocation and excuses serve foreign interests.Remember that Donald Trump still thinks he is doing business, and this is reflected in conservative language; among Republican excuses for the President’s behavior, Sen. Bob Corker (R-TN), often seen as a critic of the administration, mewled and rolled over:

A key consideration in the administration’s mind, according to Republican Sen. Bob Corker (Tenn.), is the belief that the crown prince can salvage Kushner’s stalled peace plan between Israelis and Palestinians. “A lot of the Middle East peace plan is based upon their support. They feel like they have a lot of equity there,” Corker said.

“Equity” is a curious word. Certes, the Trump family has invested tremendous “political capital”. There are a handful of Congressional Republicans willing to speak against President Trump, and the general criticism runs that tweeting disapproval is pretty much all they do compared to their voting records. And in this moment, Mr. Corker, the retiring U.S. Senator, is lending his voice in aid and comfort to presidential pandering on behalf of foreign interests. The Washington Post goes on to explain:

Trump allies acknowledged that the White House’s equivocations would probably result in growing calls from Congress for a more credible accounting of events from Saudi Arabia, but they doubted it would damage the president politically.

Equity. This is just an investment. And if Sen. Corker, a Republican, wishes to be seen in opposition to President Trump, “equity” is the wrong word. Consider an actual Trump ally, such as evangelical preacher Pat Robertson:

“We’ve got to cool the rhetoric,” Robertson said. “Calls for sanctions and calls for punitive actions against the Saudis is ill-advised … You’ve got a hundred billion dollars worth of arms sales—which is, you know, that’s one of those things—but more than that, we’ve got to have some Arab allies. We have to have it! We cannot alienate a biggest player in the Middle East who is a bulwark against Iran.”When Robertson’s co-host Wendy Griffith argued that we cannot have governments killing critical journalists with impunity, Robertson dismissed those concerns.“We’ve had so many people killed,” he responded. “We’ve had CIA people killed in Lebanon. People have been taken hostage over the years. I know it’s bad, but we’ve had all kinds of stuff, but you don’t blow up an international alliance over one person. I mean, I’m sorry.”

There is, of course, plenty wrong with that; a count from Steve Benen runs, approximately: fiction, hypocrisy dripping with prejudice, and equivocation; and while The Late Show kind of missed the point when making a Jew joke out of it, what they were chasing after remains, brightly lit and begging resolution: Mr. Robertson is ostensibly a Christian preacher. 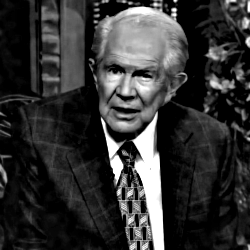 Which, naturally, raises an uncomfortable question about Christian duty, what it means to commit murder according to God, and ... er ... well ... right: Do Christians, then, have a duty to mitigate assassination?How about give aid and comfort to injustice? What is the teaching, there? Y’know. From Christ? When did He abolish the Law against killing?This is the heart of the #trumpswindle. An evangelical pastor, Doug Pagitt rightly scolds religious leaders for “trading their moral core”, and having “given up moral ground at every renewed show of support for this administration and Congress”. For many, though, who have watched Mr. Robertson and others work their craft, a question begs whether these modern-day crusaders ever had a moral core to trade away. It is as easy to avoid generalization about Christian preachers as it is to complain of trends within diversity: Pat Robertson is hardly the only coldly capitalist preacher, and this is America, where we also have such notions as Prosperity Gospel. Both the 700 Club televangelist and the retiring junior U.S. Senator from Tennessee justify President Trump’s failure of basic leadership and even decency, by appealing to money. They have equity, says the politician. Too much money to worry about one person of the wrong religion, says the Christian preacher.It is easy enough to criticize Donald Trump as a stooge for notorious foreign powers, and dusting past in order to complete the juxtaposition does feel strange, but what, really, is the excuse for Bob Corker playing stooge to the President he pretends to oppose? And what proper address is there for the Christian preacher tanking justice in favor of money? Once-removed is still stooging, so even if it’s just Mr. Trump they hope to gratify, they’re still stooges, and, ultimately, in service to a foreign power. The American people, and, indeed the entire world, deserve better from Sen. Corker. And, yeah, God would seem, at least on paper, to expect better of Mr. Robertson.

Meanwhile, Jamal Khashoggi is dead, and the inevitable movie can be naught but farce: Now that we are down to body doubles (CNN), this reads more and more like a bad script for the perfect crime in the days before CCTV, mobile phones, and a deluge of digital tracking. If it seems more and more impossible that anyone should ever expect to get away with a crime like this, well, something about bad scripts and farce goes here, as well as truth being stranger than fiction.

@colbertlateshow. “On #LSSC tonight: With evangelical leaders like Pat Robertson downplaying the death of a journalist in Saudi Arabia, Moses publicly clarifies the meaning of ‘Thou shalt not kill.'” Twitter. 18 October 2018.