“I always said he had a blindspot to Russia but things are changing for the better. He finally allowed the Ukraine to be given defensive weapons. But when it comes to Russia, I’ve said on your show a million times, he has an attitude toward Putin that I think is counterproductive. The president does believe his intel agencies.”

It really is easy to pin a lot on the quote; Steve Benen offers this take:

Now, it’s quite likely that Trump and Graham, who appear to now be rather close allies, have had private conversations in which the president has said things to the senator that he hasn’t shared with the public. But if Trump told Graham he now believes Russians stole Democratic documents, it would represent a dramatic change of heart.

As recently as mid-November—not quite two months ago—Trump told reporters that Vladimir Putin personally assured him that Russia didn’t meddle in the American election. “Every time he sees me he says, ‘I didn’t do that,’ and I really believe that when he tells me that, he means it,” the American president said in reference to his Russian counterpart.

It was part of a lengthy pattern in which Trump refused to accept U.S. intelligence agencies’ findings. “Nobody really knows for sure” whether Russia intervened in the American elections, the president said in July—after intelligence professionals told him they do know for sure.

But according to Lindsey Graham, sometime between mid-November and early-January, Trump changed his mind, and if the senator is right, the shift is a pretty important development.

The analysis is not wrong; we should always bear in mind, however, questions of presupposition.

Perhaps it is easier to start with what the senior U.S. Senator from South Carolina actually said on Meet the Press:

CHUCK TODD: I take it you must still be unnerved.

SENATOR LINDSEY GRAHAM: Well, the president does now finally believe that the Russians stole the emails from the DNC and hacked—and Clinton—

CHUCK TODD: He does?

SEN. GRAHAM: —and the Russians. Yea. Yea. But he believes that collusion is a hoax. All I can say is that it’s not a hoax. The Russians stole the emails. They did interfere in our elections. We now know that Trump Junior met with the Russians in Trump Tower and that Bob Mueller is doing a great job. He’s the right guy at the right time. He needs to be allowed to do his job. And whether or not there’s collusion—Bob Mueller will tell us. I’ve seen no evidence of collusion but the idea of Jeff Sessions being able to investigate the campaign he was on is unacceptable. Jeff Sessions did the right thing It would be impossible for him to look into the Trump campaign activities with the Russians.. 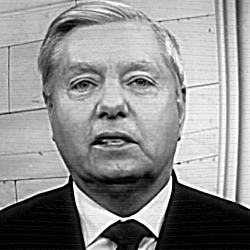 Wh–Mr. Mueller had to be appointed as special counsel. But we need a second special counsel to look at the way the Department of Justice conducted themselves.

CHUCK TODD: Alright, before I get to that, I want to ask you. Does the president’s behavior towards Russia and Vladimir Putin throughout his first year in office at all raise any suspicions with you?

SENATOR LINDSEY GRAHAM: I’ve always—I always said he had a blindspot to Russia but things are changing for the better. He finally allowed the Ukraine to be given defensive weapons. But when it comes to Russia, I’ve said on your show a million times, he has an attitude toward Putin that I think is counterproductive. The president does believe his intel agencies. He is firmly telling the world he didn’t collude with the Russians and we’re not gonna let him be the final authority on that. We’re gonna let Mr. Mueller tell us whether or not this campaign colluded with the Russians and I will do everything I can to make sure that Mr. Mueller does his job. But there’s other things about the Department of Justice and this investigation that bother me greatly and I think we need a special counsel to look at those things.

To the one, look at how Benen worked to extract what he quoted:

No matter how painfully obvious the facts were to everyone on the planet, Trump refused to accept the most basic detail of the entire controversy. According to Sen. Lindsey Graham (R-S.C.), however, all of that has changed. Here’s the exchange he had yesterday with NBC News’ Chuck Todd on “Meet the Press.”

GRAHAM: Well, the president does now finally believe that the Russians stole the emails from the DNC and hacked, and Clinton, and the Russians ....

GRAHAM: Yeah. Yeah . .... The president does believe his intel agencies.

To the other, it seems quite an effort to tailor the quote in order to postulate an analysis, but this is not a point of complaint. Rather, consider for a moment what customs of decency and reasonable conduct remain in effect, and among whom. What Sen. Graham is saying is largely a collection of dismissive fragments interspersing his pitch against the Department of Justice. Mr. Benen cobbles together that fragment of the MtP transcript in order to presuppose meaning; the alternative is accepting that Mr. Graham’s dismissive scraps are mere puffery and thus fundamentally dishonest.

The msnbc producer and blogger offers a fine analysis of the significance of what Lindsey Graham said, but only insofar as we presuppose the Senator actually meant what he said. And, yes, it is true there remain quarters many still find respectable that would suggest or even demand someone in Mr. Benen’s position not openly call corrupting, dismissive, excremental condescension—that is to say, bullshit—by its name.

This is, a question: When Lindsey Graham says Donald Trump believes the intelligence agencies, do we really believe the Senator believes his own statement?

And this is another: What does it really mean if President Trump believes the intelligence agencies about Russian election tampering?

Because one of the possibilities is that he believes them according to a context any responsible president would and continues to play this role for some other purpose; another is that the president believes his intelligence agencies because he knows they’re right.