It would be easy enough to overplay the drama in an early look toward the 2020 election by Alexander Burns and Jonathan Martin of the New York Times:

In a largely leaderless party, two distinct groups are emerging, defined mostly by age and national stature. On one side are three potential candidates approaching celebrity status who would all be over 70 years old on Election Day: Mr. Biden, and Senators Elizabeth Warren of Massachusetts and Bernie Sanders of Vermont.

Competing against the Democrats’ senior cohort is a large and relatively shapeless set of younger candidates who span the ideological spectrum: governors, senators, mayors, wealthy executives and even members of the House. They are animated by the president’s turbulent debut and the recent history, from Barack Obama’s victory in 2008 to Mr. Trump’s last year, of upstart candidates’ catching fire.

In the Senate alone, as much as a quarter of the Democrats’ 48-member caucus are thought to be giving at least a measure of consideration to the 2020 race, among them Cory Booker of New Jersey, Kirsten E. Gillibrand of New York, Amy Klobuchar of Minnesota and Kamala Harris of California. All are closer to 40 than 80.

For now, however, it is the party’s septuagenarian trio that is casting the longest shadow over 2020, and all three have taken steps to extend or expand their leadership status in the party.

In between, for good measure, is discussion of an amorphous non-faction we might consider as the collected other, including Rep. Seth Moulton (MA-06), Los Angeles Mayor Eric Garcetti, and New Orleans Mayor Mitch Landrieu. Before booking the orchestra for a dramatic score, we should remember this is merely April, 2017; Democrats need to to read the midterm map, first. That is to say, it seems a bit early to see who lands where in relation to what. And, admittedly, it is hard to account for the proverbial known unknowns in the time of Trump; the unknown unknowns seem extraordinary at this time, too.α

But while the NYT article has much to say in posturing a generational or, at least, factional fight seemingly composed of old, young, and other—dark horse? minor league? reserve? understudy?—its thirty-five paragraphs—even widening its cast to include Cuomo, McAuliffe, and a return performance for O’Malley—say little of the issues at stake.

There are always generational questionsβ, but one of the key fights emerging as Democrats recover from their November disappointment and form up for the next round will have to do with a strange juxtaposition of inclusion and economic justice. Rebecca Traister, for instance, wonders if Democrats and liberals are somehow supposed to “abandon women’s rights in the name of progressive politics”—

The most disturbing thing to emerge from this week’s badly bungled Democratic “Unity Tour” staged by Vermont senator Bernie Sanders and new DNC head Tom Perez was the fact that the only thing on which the two men seemed to easily agree was that reproductive rights are not necessarily fundamental to progressive politics. This led to uproar and outrage among some precincts of the left, and eventually to mea culpas and “clarifications” from Sanders and Perez. But it is worth closely examining this fight over the importance of reproductive rights in the party because it is an argument that the Democrats seem to rehash over and over and over again.

—and Melissa Hillman similarly explains “why women are so angry with Bernie Sanders”:

And while it is easy enough to overplay this dispute, as well, it is historically demonstrable that Democrats have long—as Traister notes—struggled with questions about both the possibility and propriety of sacrificing women at the altar of progressive politics. As Hillman explains:

When Sanders repeatedly declared that “identity politics” were a problem, he exposed a dangerous weakness in progressive political thought that remains unaddressed. We live intersectional lives, and these issues must be addressed intersectionally. To separate class from gender, race, sexuality, and ability in fighting for economic justice is to create a fiction that economic injustice is only driven by one kind social injustice—the kind that able-bodied cishet white men experience. It’s a dangerous fiction that at its heart reinforces patriarchal white supremacy, and it’s becoming all the more dangerous as we fight against an administration and its attendant political movement that wants nothing more than to roll back as many social justice gains as possible.

The rising tide cannot necessarily lift sabotaged boats. There is in the round and round and roundabout a dangerous vagary that never finds resolution, and, really, cannot remain forever ignored: It is easy enough to get caught up in the rhetoric about prioritization and whether one is moaning about misogyny or otherwise making traditional supremacism uncomfortable, but what does it really mean to not? 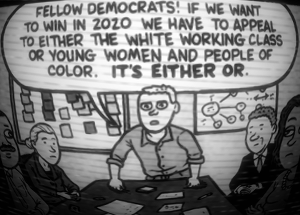 Can the rising tide equally lift those who suffer wage discrimination?γ Or does that question count as identity politics? You know, just for instance.

Because if the idea is to pitch and construct economic justice, how does that notion relegate inflicted and enforced deprivation to some secondary identity politic?

This question will likely play out in some context relevant to generational lines, but as the Democratic Party reckons once again with its own seemingly irreconcilable contrast ‘twixt an imposed reputation as dangerously liberal and its actual nervous technocentrism history demonstrates drifting e’er rightward, we might wonder to what degree, say, a Harris voter might be on board with Bernie Sanders’ take on “identity politics” just because they happen to be young. “Divided by generations”, as the NYT headline has it, is very nearly a distraction.

α cf. Rumsfeld, qtd. in Seely, on knowing or not what is known or not. More to the moment, Doyle McManus provides an example in wondering whether Congressional Republicans are “getting serious about the Russia investigation”, noting:

What’s really going on, though, is that Republicans are hedging their bets. Nobody wants to be the next Nunes. Even loyalists like Chaffetz are unwilling to defend the White House on all fronts, because they don’t know what else may be out there.

β See DeVega on the complexities of history and politics regarding the 1994 Violent Crime Control Act, and also Parnes on expectations for an anticipated Hillary Clinton presidency, including generational differences apparently affecting perceptions of the infamous “superpredators” rhetoric.

γ Or hiring discrimination Or, you know, death.

Burns, Alexander and Jonathan Martin. “Emboldened by Trump but Divided by Generations, Democrats Look to 2020”. The New York Times. 30 April 2017.

Hillman, Melissa. “Why Women Are So Angry With Bernie Sanders”. The Huffington Post. 24 April 2017

McManus, Doyle. “Is the GOP getting serious about the Russia investigation?” Los Angeles Times. 30 April 2017.

Traister, Rebecca. “Will We Abandon Women’s Rights in the Name of Progressive Politics?” The Cut. 21 April 2017.