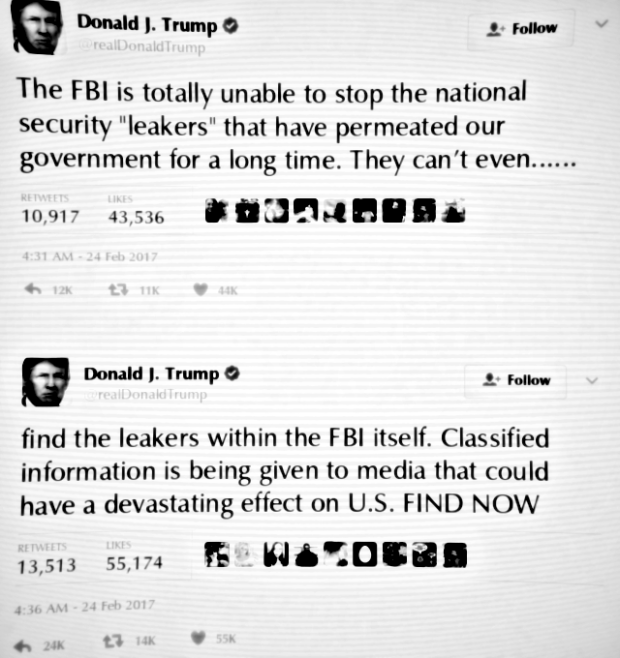 It would seem ironic if, in the end, Republicans managed to make “patriot” the new “communist”. More than political irony, though, the strangeness of the Trump White House is such that we really cannot afford to skip the part that wonders if perhaps the president’s latest twitshit tantrum really does intend its darker implication.

There are myriad commentaries on the values, dangers, and distortions about leaking to the press; it seems well enough to cut to the chase: What does the president intend to do about the “national security ‘leakers'” that the “FBI is totally unable to stop”?

Political hyperbole certainly makes the point, but the idea that the FBI, or any other government agency, can succeed to such degree President Trump demands is virtually unimaginable. Thus: Can the White House purge all leaks, leakers, and potential leakers from the government?

In application: If the intelligence community comes to the president with a national security concern and subsequently watches the executive protect the security risk while deliberately deceiving press and public, then what next? These are the United States of America; we absolutely do not march into the Oval Office with a bunch of guns and say, “Sorry, boss, it’s time to go.”

No juntas. No coups. What then?

Run to Congress? And if Congress is inclined to permit the president such discretion as to deliberately expose the nation to such risk? Nor must a president be removed; if successful, a mistake is tempered.

Suddenly we see the power of the leak. The press applied the necessary heat, and the National Security Advisor resigned. The problem for the Trump administration does not seem to be the leaks. That is to say, the leaks are symptomatic of a president giving all signals of deliberately working against the United States of America. Something about hyperbole goes here, and perhaps it is the question of what to do when such talk is no longer so clearly hyperbolic.

What does it look like if President Trump gets his government of Nuremberg excuses? To the one, he simply cannot; to the other, what influence within his White House and executive branch do we expect will stop him from trying?

And it is in this latter, the mere notion of trying to seal leaks and purge personnel willing to so challenge him, that we might pause and consider the terms of what we are looking at.

Because, certes, ’tis easy enough to denounce patriotism as some menace to liberty, and there are days and contexts in which it is. But when we pursue the noble idyll at the heart of what patriotism is supposed to meanα, is there any greater love of country than protecting itself from its own excesses? That is to say, if honorable men doing honorable work, as the saying goes, then we should, from time to time, see evidence of this honor pushing back against the excesses of necessityβ.

Trump’s outburst comes hours after CNN and The Associated Press reported that White House chief of staff Reince Priebus had asked the FBI to publicly dispute reports that the president’s team had communicated with Russian officials throughout the 2016 presidential campaign.

FBI director James Comey reportedly refused to comply with the request because of the agency’s ongoing investigation into Trump’s associates and their potentially illegal links to the Kremlin ....

.... The White House has repeatedly denied allegations that Trump associates kept “constant communication” with Russian officials during the campaign, as first reported by The New York Times and CNN this month.

Trump’s Friday tweet didn’t deny accusations that the White House attempted to meddle in the FBI’s investigation, but instead took aim at FBI “leakers” who could have a “devastating effect” on the U.S.

The target of the president’s attack appears to be misdirected as the AP reported that a “White House official” leaked Priebus’ request for the FBI to squash the reports.

Patriotism or pride, the effect might well be the same. To the one we might ask if, had Donald Trump been less unkind toward the intelligence community while trying to deny the Flynn question, we would see such leaks as we have. To the other, it seems a difficult proposition to plot the course, otherwise. For starters, if the intelligence community is as corrupt and warmongering as our worst spitting, furious indictments might snarl or shout in the public square, then why now, when they would seem to have a president who wants to exploit all that? If, on the other hand, we afford our spies and their masters some presumption of American decency, what the hell, short of a shooting war, is as imminent as a wannabe superpower running a worldwide psyops campaign against the American people while tampering with the functions of both our elections and our government?

Much like the priesthood shouldn’t be a crude joke about child abuse, neither is spycraft exclusively the province of self-adoring, antisocial cosmopolitans perpetually scheming toward their own ends regardless of the nation so stupid as to employ them. Some of these people actually get into this damn business for all the doe-eyed, goody two-shoes reasons we might romantically and hopefully and patriotically pretend.

And right now, there is a possibility that their country needs them now, more than ever, and in a context quite frankly terrifying for the fact that they should never have to say it.

By Columbia’s light, they should never be in the Oval Office.

It is very nearly a show of hands joke, but it all just goes downhill: Who thinks Donald Trump is capable of purging leaks from his administration? Who thinks the president is stupid enough to try?

Or, perhaps more directly, can President Trump convince the American people that leaks revealing actual danger within the government are a bad thing?

Practically speaking, it would seem to be a matter of convincing people to accept and assert some mitigating or even embracing regard toward the Russian government, its general truculence, and the constant witness of the President of the United States sucking up to Vladimir Putin.

Ego defense is what it is; a whole lot of people underestimated its power to elect Donald Trump in the first place. In the eternal question of sinister or stupid, though, at some point it behooves us to ask how and why this is happening.

Can the Trump administration convince the American people they are offended if anyone lets them know anything unpleasant about their game-show-host-cum-president?

We also ought to ask how and why such a question is viable.

This question is, in itself, a disaster.

This is also an American presidency.

And this is #WhatTheyVotedFor.

α Sure, it’s more than a feeling, but there is no definition so precise and functional as to fail to allow for its own betrayal and destruction.

β Nor is the phrase “excesses of necessity” so oxymoronic; virtually anyone can justify the necessity of occasional excess, which apparently is less dangerous than justifying the so-called excess as proper necessity. Never mind.

Image note: President Donald J. Trump (@realDonaldTrump): “The FBI is totally unable to stop the national security ‘leakers’ that have permeated our government for a long time. They can’t even find the leakers within the FBI itself. Classified information is being given to media that could have a devastating effect on U.S. FIND NOW” (via Twitter, 24 February 2017; 1, 2)

Miller, Hayley. “Donald Trump Is Once Again Going To War Against His Own Intelligence Agencies”. The Huffington Post. 24 February 2017.

Trump, Donald. “The FBI is totally unable to stop the national security ‘leakers’ that have permeated our government for a long time”. Twitter. 24 February 2017.