Let’s just go with Russell Berman of The Atlantic, framing his “Five Reasons Why Ted Cruz’s Endorsement of Donald Trump Is Stunning”:

Ted Cruz set aside his many differences with Donald Trump on Friday to endorse for president a man whom he once called a “serial philanderer,” a “pathological liar,” “utterly amoral,” and a “sniveling coward”; who insulted his wife’s looks; who insinuated Cruz’s father was involved in the assassination of John F. Kennedy; who said he wouldn’t even accept his endorsement; and who for months mocked him mercilessly with a schoolyard taunt, “Lyin’ Ted.”

There is a bullet point narrative, curated by Dara Lind and Dylan Matthews over at Vox. “Ted Cruz unhinges his jaw and swallows his pride”, reads the headline, and, certes, one might contest that he swallowed anything, sneer cruzlike at any intersection of the Texas junior’s name and the concept of pride, or point out how the unhinging is a practiced move and, you know, (ahem!) insert obviousα joke here. 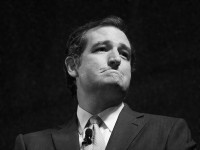 • So … whence the change of heart? The most high-minded explanation: Trump recently started calling for the US to retain control of the organization that hands out internet domain names, rather than letting it pass into international hands. It’s a cause Cruz has championed for some time. [The Verge / Amar Toor]

• The less high-minded explanation: Republicans are in danger of losing the Senate this cycle, and Cruz hasn’t been doing a lot to improve conservative voter enthusiasm. His reticence has been noticed. [Politico / Burgess Everett]

• The most venal explanation: Cruz might have faced a Senate primary in 2018 if he hadn’t endorsed. And RNC Chair Reince Priebus threatened earlier this week that Republican officeholders who didn’t endorse Trump might not be allowed to run as Republicans in future. [RedState / Dan Spencer]

Okay, okay, okay. Right. It’s important enough to the political supporters he just betrayed, but. you know, come on, they were stupid enough to back Ted Cruz.

Actually, in all of this, the bit from Priebus really does almost seem newsworthy, but what is the actual principle at stake, here? To the one, Reince Priebus probably needs to resign, you know, just because―(I mean, just look at this debacle!)―but, yeah, Ted, y’all said you’d hop on. There are forty-three million miniscule amusements to get distracted by, like how this seems predictable when cutthroats try to work together, except it’s also really easy to get lost trying to explain them all. Like the cutthroat bit, which might sound offensive in a time when we don’t use the word much, anymore, and also perhaps a question of whether anyone remembers why it’s weird for Democrats to be the “blue” party.

Maybe it’s newsworthy because this time we’re supposed to remember: After all that fuss, this is what Ted Cruz’s word is worth.