This couldn’t have waited until tomorrow?

Striding into history, Hillary Clinton will become the first woman to top the presidential ticket of a major U.S. political party, capturing commitments Monday from the number of delegates needed to win the Democratic nomination.

It seems for the moment this development has any number of people puzzled. On msnbc, Chris Hayes, Rachel Maddow, and Andrea Mitchell all offered double-takes over the timing. While it is certainly possible to understand a certain notion, that these superdelegates decided to start wrapping up the Democratic Show in favor of turning to the Big Show, the idea that professional political hands couldn’t see the problem with the timing is problematic. Then again, maybe they didn’t coordinate. We might note this isn’t like when South Dakota upped its prestige a notch when its superdelegates decided to clinch the nomination for Donald Trump. Right now, as far as we can tell, of the ninety-five Democratic superdelegates who had yet to commit publicly during repeated inquiries over the last seven months, some did this time around, and AP just happens to be able to turn its eye to history, scooping the candidate herself.

The article, combining the talents of Hope Yen, Stephen Olemacher, Lisa Lerer, and Catherine Lucey―as well as enlisting further help from three of their colleagues―pretty much writes Bernie Sanders out of the presidential campaign, to the point of very nearly piling on.

It is easy enough to figure that if you’re the journalists, you don’t hold this kind of story. Then again, what of the superdelegates? This outcome is ruffling feathers everywhere. Why this week? Why today? The detail of this rush to blast the glass ceiling before Hillary Clinton herself actually did really will be interesting.

This really can work out to an accident of circumstance; indeed, that would be the strongest presumption. Nonetheless, there really is a reason why this prickles. That is to say, Really? On the eve of American history itself, we find a way to bungle this up with a cloud of controversy?

Sen. Sanders (I-VT) has an interesting complaint. It seems reasonable enough to wonder why today, but denouncing a “rush to judgment” by the media is not the strongest response. Perhaps that’s why the AP essentially administered last rites and buried Mr. Sanders while writing, it seems, for a perch in history:

Clinton has 1,812 pledged delegates won in primaries and caucuses. She also has the support of 571 superdelegates, according to an Associated Press count.

The AP surveyed all 714 superdelegates repeatedly in the past seven months, and only 95 remain publicly uncommitted.

Sanders plans to make the case to superdelegates that he is better positioned to beat Trump in November. While superdelegates can change their minds, those counted in Clinton’s tally have unequivocally told the AP they will support her at the party’s summer convention. Since the start of the AP’s survey in late 2015, no superdelegates have switched from supporting Clinton to backing Sanders.

Clinton outpaced Sanders in winning new superdelegate endorsements even after his string of primary and caucus wins in May. Following the results in Puerto Rico, it is no longer possible for Sanders to reach the 2,383 needed to win the nomination based on the remaining available pledged delegates and uncommitted superdelegates.

Indeed, Clinton’s victory is broadly decisive. She leads Sanders by more than 3 million cast votes, by 291 pledged delegates and by 523 superdelegates. She won 29 caucuses and primaries to his 21 victories.

That’s a far bigger margin than Obama had in 2008, when he led Clinton by 131 pledged delegates and 105 superdelegates at the point he clinched the nomination.

Echoing the sentiments of California Gov. Jerry Brown, who overcame a decades-long rivalry with the Clinton family to endorse her last week, many superdelegates expressed a desire to close ranks around a nominee who could defeat Trump in November.

Though she marched into her second presidential primary campaign as an overwhelming favorite, Clinton could not shake Sanders until its final days. He campaigned aggressively in California ahead of the state’s Tuesday election, unwilling to exit a race Clinton stood on the cusp of winning.

Beyond winning over millions of Sanders supporters who vow to remain loyal to the self-described democratic socialist, Clinton faces challenges as she turns toward November, including criticism of her decision to use a private email server run from her New York home while serving as secretary of state. Her deep unpopularity among Republicans has pushed many leery of Trump to nevertheless embrace his campaign.

Yet Clinton showed no signs of limping into the general election as she approached the milestone, leaving Sanders behind and focusing on lacerating Trump. She said electing the billionaire businessman, who has spent months hitting her and her husband with bitingly personal attacks, would be a “historic mistake.”

And so it goes. After opening with a nod to the historical moment, the AP article lays Mr. Sanders to rest, and manages to weave elements of a eulogy into retelling the Clinton campaign in triumphant and heroic terms:

Even without the nomination, Sanders can claim ideological victory. His liberal positions pushed the issue of income inequality into the spotlight and drove Clinton to the left on issues such as trade, Wall Street and campaign finance reform.

But she prevailed, in part, by claiming much of the coalition that boosted Obama. She won overwhelming support from women and minorities, catapulting her to decisive victories in diverse, delegate-rich states such as New York and Texas.

Seven writers it took to do all that. We should be impressed.

Still, though, really? This just happened to happen today? Even for the AP’s part, this really, really, really couldn’t wait until tomorrow, when it was going to happen anyway?

So … yeah. Congratulations to the presumptive Democratic presidential nominee, Hillary Clinton. Er … ah … so … what, then, twice the celebration tomorrow? 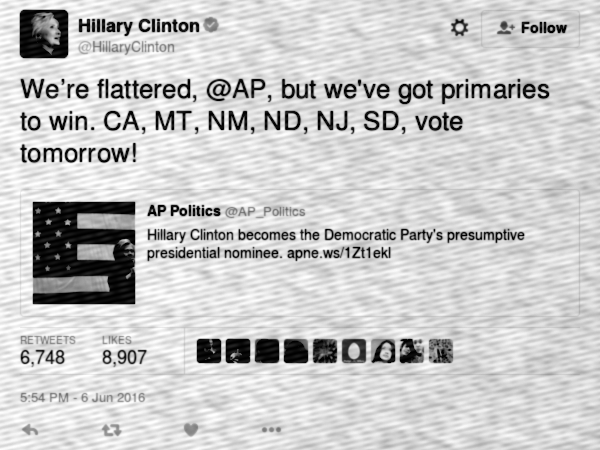