All things considered, this is actually not unexpected. Well, you know.

Maine Gov. Paul LePage on Thursday added his voice to the ongoing debate regarding the U.S. Supreme Court vacancy created with the unexpected death of Justice Antonin Scalia last Saturday.

“I’m a big constitutionalist,” LePage said. “If it’s in the Constitution, I think it means something.”

That is to say, Governor LePage managed to get one rightα. Then again, this one is pretty easy.

Still, though, it seems rather quite funny. To wit, as Harper Neidig reports it for The Hill: 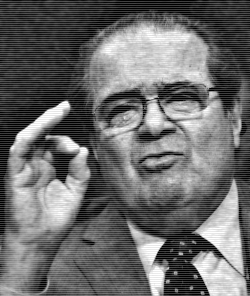 Gov. Paul LePage of Maine broke from his Republican colleagues Thursday, saying President Obama has a constitutional duty to nominate a successor to the late Supreme Court Justice Antonin Scalia.

“I’m a big constitutionalist,” LePage told the Maine Sun Journal. “If it’s in the Constitution, I think it means something.”

Yeah. That guy. Senate Republicans need to take a moment with the mirror. When Paul LePage is one up on you, one might expect such a circumstance to, you know, mean something.

α For those unacquainted with Mr. LePage’s relationship with ideas constitutional, we might simply recall the time he allowed sixty-five bills to pass because he did not understand the pocket veto.