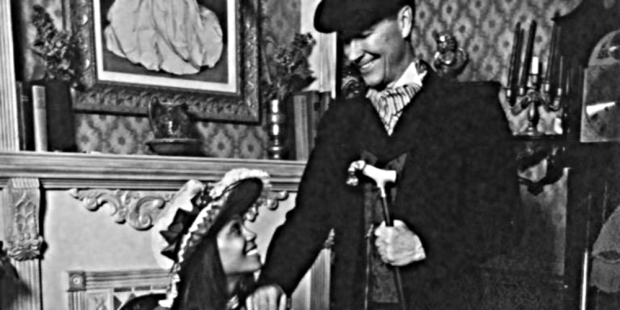 This is one of those things for which I have exactly nothing:

Let’s dissect this, shall we?

To the right stands former Virginia delegate Joe Morrissey, 57, a Democrat running for a Virginia state Senate seat as an Independent after Democratic Party officials rejected his attempt to seek office. Joining Morrissey are his 19-year-old receptionist, Myrna Pride, and their 9-week-old son Chase, a child Morrissey publicly acknowledged as his son for the first time Wednesday.

The image shows Morrissey, who is white, and Pride, who is black, in what some reporters have described as “period” dress — without mention of the fact that said period would appear to be the antebellum South or that said photo was taken in Virginia Beach, a city that sits about two hours from Richmond, the onetime capital of the Confederacy.

Would you believe me if I told you things only go downhill from there? As Janell Ross explained for the Washington Post:

While a biracial family’s antebellum-themed photo may raise eyebrows under any circumstances, this one carries additional meaning. On Wednesday, Morrissey told a Richmond radio show audience that Chase was conceived when Pride was 18. Last year, Morrissey pleaded guilty to a misdemeanor charge of contributing to the delinquency of a minor in connection with his relationship with Pride — while she was 17 — but denied the original charges. Prosecutors initially charged Morrissey with multiple felonies, alleging that he had sex with Pride while a minor and shared nude photos of her.

In December, Morrissey agreed to a plea deal on a misdemeanor charge in which he admitted no guilt and avoided conviction on the felony charges.

He agreed to serve a six-month jail term that was reduced to a 90-day work-release sentence. Morrissey resigned from the House as a Democrat and later declared himself an independent candidate for his old seat. After easily winning back his seat, he left office this year to run for state Senate.

No, really. What are we supposed to do with that?

I wouldn’t even know where to begin. It is hard enough to get past, “What?”

Image note: Joe Morrissey (right) and former receptionist Myrna Pride pose in antebellum dress to celebrate and announce the birth of a son; Mr. Morrissey, a former Virginia state representative, previously denied any sexual involvement with Ms. Pride, and even pled to reduced charges after being accused of molesting her as a minor. Uncredited photo circa May, 2015, via Joe St. George, Twitter, 14 May 2015.

Ross, Janell. “How a former Virginia lawmaker made a bad situation even worse, in 1 picture”. The Washington Post. 21 May 2015.