Netanyahu’s speech is set for March 3.

Some Democrats plan to skip it because they consider it a divisive stunt and a breach of protocol that suggests the U.S. is taking sides in coming Israeli elections.

Boehner was asked by “Fox News Sunday” why he told Israel’s ambassador to the United States not to mention the invitation to the White House in advance.

Boehner says he “wanted to make sure that there was no interference.”

Look, it’s not exactly a coup or anything, but still, come on, John, give us a fucking break.

The story so far is simple enough: House Republicans invited Israeli Prime Minister Benjamin Netanyahu to speak before Congress, two weeks in advance of an Israeli election, in order to bolster both Netanyahu’s electoral profile and the Republican argument against the Obama administration. Starting with the simple fact of Congress attempting to conduct foreign policy―a constitutional duty of the president―the whole idea is the sort of undignified, childish usurpation of American law and tradition that we might otherwise expect of the GOP except for the proposition that it is uncouth to bear such low expectations for elected leaders.

Which, in turn, is also why the story does not seem to have much traction outside Beltway and armchair-wonk circles; perhaps some wonder what the big deal is.

Additionally, there is a twist to the plot that has to do with another aspect of Congressional Republicans actively working to undermine American foreign policy. There is a saying about politics and the water’s edge; traditionally, you just don’t do what Republicans have been doing.

There’s no formal rule or law, but there’s been a long-accepted political norm: when prominent Americans travel to foreign soil, they should show restraint about criticizing America’s elected leaders. This standard about “politics stopping at the water’s edge” was especially pronounced during the Bush/Cheney era — it was considered outrageous if someone undermined confidence in the administration while abroad.

At the time Benen noted two examples; one was a criticism of Al Gore for acknowledging human rights abuses committed against Arabs during our War on Terror, an act denounced in editorial pages as “supreme disloyalty” to America. The other exmaple was Sarah Palin in India, telling the world that President Obama was “dithering” his way through the Libyan transformation. As Benen suggested, and so it came to pass: “I imagine the reaction to Palin’s remarks won’t be quite as intense. Call it a hunch.”

There are other valid considerations about the proposition, such as the idea of an actor or other famous artist needing to keep his mouth shut because he was in France; most Americans traveling abroad consider the ability to criticize their government part of “survival”, though largely colloquially―in friendly cultures it is enough when asked what our fellows are up to if one simply nods sagely, spreads his hands in an abstract question, and shrugs as if to say, “I have no idea what they’re doing.” But in this case dwelling on conservative tantrums about Johnny Depp really is a distraction.

As Benen noted several months ago for msnbc:

According to the report in The Hill, the Kentucky Republican sat down with Guatemalan President Otto Perez Molina for 45 minutes, and the senator discussed politics with the foreign head of state.

“I think what’s happened at the border is all squarely at the president’s lap,” Paul said. “The problem and the solution aren’t in Guatemala. The problem and solution reside inside the White House.”

As a substantive matter, the senator’s position is tough to defend or even understand. President Obama didn’t sign the 2008 human-trafficking measure into law; he didn’t create awful conditions in Central American countries; and he didn’t encourage anyone to lie to desperate families about what would happen to their children. If there’s a coherent explanation for why the White House to blame, it’s hiding well.

But even putting that aside, since when is it kosher for U.S. officials to travel abroad to condemn U.S. leaders like this? ....

.... I seem to remember a time when there were norms that deemed actions like this unacceptable.

This is what it comes to; Chris Suellentrop, presently a video game critic for the New York Times, presented arguments nine years ago denouncing Gore’s words about a domestic issue visible on the world stage as treasonous, having “simply no defense”, and wondering whether Gore’s poor political judgment should disqualify him from running for president.

Yet here we are, tempted by shadows of distraction. Despite the twists of plot and turns of fancy offered up by Congressional Republicans, the Worst Speaker of the House in American History has just claimed another filthy, battered feather for his garish cap.

After all, he knew he was committing a huge breach of protocol. He just admitted it. He knew the White House standards about hosting heads of state during election season; his excuse for bypassing the executive is that he didn’t want them to protest or otherwise interfere with his wilful misbehavior. 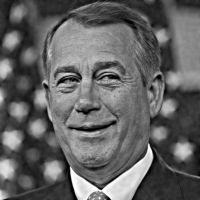 The water’s edge principle is flipped; the Speaker of the House is violating protocol in order to bring the international community before Congress to undermine the White House, as well as tamper in Israeli elections. And he has pretty much admitted it.

Side issues are myriad, such as the prospect of how things should go when the proverbial shoe is on the other proverbial foot but still crammed in Congressional Republicans’ proverbial mouths. We’ve seen this before, and many times, whether it is an escalation of political lies, political attacks, outside spending, weakening our voting structure by attacking the right to vote, and generally doing everything they can to waste not only their time and ours, but also the nation itself. So, also, does this appear to be what American voters want; the question arises just how far they want this to go.

There are constitutional ways to remove foreign policy from the executive and bring it to the legislature; the Speaker should simply admit this is what he’s after. Except, of course, for the proverbial shoes, feet, and mouths.

Even still, there remains the proposition not only of removing American foreign policy from the executive, but also, through the legislature, giving it over to a foreign head of state.

Think about it. This is what people voted for. Or is it?

Seriously, think back to November. Did the American people really vote to hand our foreign policy over to Benjamin Netanyahu?

Or perhaps that’s a question only our Republican neighbors can answer.

Remember that Republicans frequently assert that government does not and cannot work. And then watch what they do while in office, and suddenly it becomes apparent why. They’re not just working the thesis, they’re actively trying to prove it by wrecking the government.

And Speaker Boehner? He just admitted that he knew the whole time he was doing something wrong.

See Also: “What it Comes To (Bibi-Boehner Mix)” (bdti)