Sometimes we pass on a story not simply for basic matters of will―Do I really want to do this now?―but also because we doubt ourselves in the moment. Never mind. A paragraph from Jodi Rudoren of The New York Times:

The invitation to address a joint meeting of Congress to make the case for new sanctions on Iran came from the House speaker, John A. Boehner, a Republican. Mr. Boehner did not consult either the Obama administration or his Democratic counterparts, something several veteran diplomats described as unprecedented. The White House responded with its own snub, announcing that President Obama, who has promised to veto any new sanctions, would not meet with Mr. Netanyahu while he was in town.

And that, in truth, is where we dropped the story last week, mostly not bothering with it because while this is a fascinating chapter in the continuing Republican denigration of the American political system, it really did seem the sort of obscure thing that would have our neighbors wondering where we got this stuff and why we bother with such minutiae.

To borrow from a great American statesmanα: Oops.

While it is true that American voters do not seem to care about this latest chapter, they will when cable news tells them to, and as anyone so unfortunate to witness the spectacle of American politics can tell you, voters will miss the point.

An international associateβ frequently posts to social media about Palestinian affairs and the Occupation, and while it is one thing to suggest that our foreign neighborsγ often seem more attuned and fluent in American outcomes, they often miss the cultural subtleties that you either have to be born into or else, you know, “you had to be there”; the truth is that sometimes it requires outsiders to see the cold, mechanical reality and name it for what it is. And, in truth, there is a purely American farce taking place. But one of the things that has become apparent during the intervening period is that people outside the U.S. care a lot more about this question of protocol and propriety than the average American voter is capable of comprehending.

That is to say, when the story first broke, there was a sense that, well, this is fascinating, but come on, what do Americans actually care? Netanyahu could speak or not and it won’t change the prevailing determination to conflate Israel and Judaism, and therefore we Americans must necessarily back the Israeli government regardless of what it does or doesn’t do; the label defines the moral requisite. Translation: In the U.S., the prevailing ideology is that Israel is synonymous with Judaism, and therefore objecting to Israeli government actions is to hate all Jewish people everywhere.

But not everyone accepts that proposition, and if one is willing to actually pay attention to the issue, what they learn is that the prevailing ideology is crumbling. And this latest chapter only reiterates that our presupposition is tremendously insecure. Justifying certain Israeli actions requires the conflation of modern Israel with the whole of Judaism, a proposition that is demonstrably untrue and, furthermore, degrades quickly when hauled out into sunlight.

Meanwhile, there is a Really Big Game coming up this weekend, and it would surprise us none if Cameron Cardow’sδ recent cartoon via Cagle Post finds a large international audience that does not need the American side of the joke explained to them.ε Still, though, the American side is fascinating. Right now, nobody outside the wonk sector and their armchair fans give a damn, but just give it a month. When Netanyahu arrives, it will be the talk of cable news, and suddenly people who have no idea what is going on will pretend that they have no idea what is going on and, furthermore, that they are offended by anyone who actually does have a clue.

And, as we are demonstrating here and now, that clue need not be especially large or significant. You know, just a rumor of a hint of a whiff of a clue.

No, really, our performance today, in this post, is sufficient to include among those elitists alleged to hate America. (And, yes, that’s how quickly Judaism and Israel can evaporate from the discussion, because even when it’s about Israel, it’s really about Iowa.)

And if you should doubt the prior paragraph, may the Goddess hold you in Her heart for your steadfast faith in humanity.

Then again, we digress. The point is that somebody needs to deflate Netanyahu, and somebody needs to find a way to alleviate the massive bigotry driving the insane pressure that explodes the situation in Palestine. It’s one thing to tell the Palestinians to get their shit together and stand on their own two feet. It’s something entirely different to say that while kicking them in the teeth. 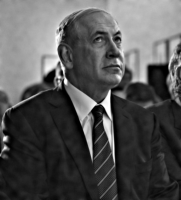 And for all Americans hear about how Obama this and unprecedented that, the only thing that will help deflate our own domestic political tensions is when voters get their shit together, stand on their own two feet, and start thinking for once in their lives. Remember who’s complaining about unprecedented Obama, and then consider who has decided that Congress should conduct foreign policy instead of the president.

We are not so significant a corner of the internet that anyone of consequence will notice, so it is true we enjoy certain comforts. To wit, it is possible to make certain predictions and not expect the marketplace to react by manipulating circumstances to avoid those outcomes.

So watch. And listen. And read.

Right now, only the wonks and would-be wonks are taking any significant notice. It is only when Netanyahu arrives in town that this will get any widespread attention, and at that point we’ll have to reset to square zero and start the whole discussion over again.

It’s what we do. It’s an American thing. That is, sure, I hear news from other corners of the human endeavor suggesting that ours is not the only society to suffer such aspects, but this really is an American specialty.

Oh, wait. Not embittered, but fascinated. Okay, whatever. No, really. Just watch.

α TURD: Do we really need to disclaim the sarcasm?

β I loathe the word “friend” for social media associations by which people never encounter one another face to face, in flesh and blood. Still, though, there are some among my associates I truly consider proper, genuine friends despite being “merely” e-friends.

δ Note for Americans: Cam Cardow publishes for the Ottawa Citizen, a Canadian newspaper. And if you need that note, it doesn’t matter that I can’t spell “Ottawa” without looking it up (Goddess grant, I keep typing “Ottowa”) because, well, at least I know the name of the freakin’ newspaper up there.