Okay, in the first place, yes, there is obviously something amiss.

The Salon article itself is by Kendall Anderson, and bears a familiar, queasy sentence for a headline: “I wish I’d never reported my rape”. It is, of course, as depressing as you might expect; and it is also another one of those pieces that ought to be some sort of required reading.

I sit in the windowless interrogation room, fingers brushing against the cool metal of handcuffs attached to the chair, and try to comprehend what the detective sitting across from me is asking.

“Were you a virgin?” he says, his lips curling slightly as he repeats the question. “Explain to me, how could you have been bleeding if you weren’t on your period? Have you had sex before?”

I feel my face flush with embarrassment as I think about how to respond. Before I can say anything, there’s a knock at the door and another officer walks in.

“The suspect’s attorney is here.”

Suspect? My stomach drops. Did he really just refer to me as a suspect?

The detective turns to his colleague.

“She agreed not to have the lawyer come in for this.”

I open my mouth to object. Our “agreement” consisted of the detective asking me why I needed a lawyer if I was innocent. Before I can speak, the other officer leaves, the door closes and it’s just me and the detective again, alone in the windowless room.

There are so many things to say at this point.

Something about why people loathe the police, for instance. Or yet another screed about why anyone who dares suggest they’re tired of hearing about the issue needs to shut the hell up until they have a useful idea for addressing the real problems inherent to the issue, namely what we do to reduce the occasions it comes up by reducing the number of occasions it needs to come up―i.e., how to reduce the number of rapes occurring in our society by properly addressing the reasons they occur.

Don’t cry for me; this isn’t my issue. Except it also is.

That is, it’s not my issue because it’s never been me; life has never obliged me to endure these experiences. But at the same time it is my issue because it is my society, and my fellow human beings are my fellow human beings. It is one thing to joke about what my parents could possibly have expected teaching us mechanical, callous capitalism―“When you grow up do you want to be allowed to take care of yourself and your family and the people who deserve your help or be forced to take care of everyone?”―as a moral virtue, but then sending my brother and me to summer Bible day-camp―“God first, others second, self third”―and putting us through Lutheran confirmation? No, really. Hmm, Dad is Dad, but God is God. Dad? God? Dad? God? Sorry, Dad, you lose.

But this certainly isn’t about me, or the soul-eating price of a bleeding heart. Quite simply, my neighbors in this world deserve better. This becomes my issue because even if my father’s Reagan-era mantras are true, the issue still reaches close enough to touch, if not me, then mine. Even discounting those self-centered “capitalism” fantasies, well, right. Once we dispense with them, this becomes my issue for obvious reasons: My neighbors in the world deserve better.

And that all sounds well and fine, but it is also unavoidable that one acknowledge that even for those who haven’t been there, haven’t lived that, this is an ultimately wearying discussion. The punch line isn’t funny; it isn’t intended to be funny; it is all the more horrifying if you’ve watched another person go through those experiences; we who have not been there or lived that really do face an objective barrier to our assessment that, frankly, is best not overcome.

Well, in the direct way.

Then again, a little faith might actually save a life. Cynicism sounds great in principle―question everything!―but there comes a point when it is obviously the wrong way to treat our fellow human beings.

The article itself is simply depressing. But as I scroll to the end and read the punch line, my eye drifts down the page, and suddenly―really? now?―I’m enraged. Not angry. Not frightened for my daughter or other human beings in the world. Simply enraged.

And part of this has to do with another phenomenon entirely, called social media. It is, for instance, always an abstract sense of conflict when a family announces that their three year-old son has just lost that titanic fight with neuroblastoma, a fight we all knew he would lose, and you see at the bottom of the notice that twenty-seven people “like” this post. Our society is redefining the word “like” because it is easier than, say, adding another virtual button. And, you know, that in itself presents a range of unpleasant questions, but I risk digression.

The thing is that even in that sense of, “I know what you mean”, the result is still often really, really awkward.

• “Updated: Pennsylvania is literally blaming a woman for her own rape”

• “Is rape legitimate if she dresses provocatively? One author argues yes.”

• “‘This would be rape if you weren’t so stupid’: ‘Louie’s’ most disturbing scene yet”

But here’s the kick in the parts. Filed under, “More related stories”:

And suddenly I am enraged.

Now, to be fair, though, one can read those headlines and consider potential relevant aspects―one can assert with confidence that a horrifying number of rapes will occur this coming weekend under circumstances strongly associated with a Super Bowl party, and in any overly pious institution with all sorts of sublimated sexual obsessions rape is a virtually assured phenomenon―but that one about men sticking their hands in running snowblowers requires a rather crass and useless joke. 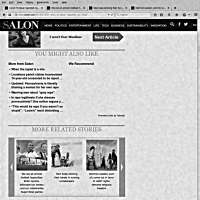 For the record, yes, I clicked the bait. Just now. Not even a hunch, but, rather, a cynical assurance based on certain presuppositions about how our society works. You can already guess the result.

Not a single one of those “related stories” has anything to do with the rape phenomenon, either in general or within our society particularly. Or, well, at all. Period. Not a word.

Say what you will about automation, but there are no robot overlords, so they didn’t impose this cracked bottery on us.

And say what you will about neuroses; it would be grotesquely irresponsible to pretend this context for feeling such anger is anything other than ego defense; since I can’t rally myself to be enraged at a real phenomenon so large that rage feels futile, I take it out on the innocent, defenseless bots that have no idea what they’re saying or what any given outcome suggests.

Even such, though, come on, really? Honestly, this tart presentation is … well, not so much ineffable in its stupidity, but there comes a point when a blue streak is just another blue streak, no matter how impressively creative or sustained it might prove iteself. And it’s not just the idea that this particular result from this one particular page might be presented a thousand times and more. Rather, this is a spectacularly awful example of just how meaningless mass communication is becoming.

And we can certainly make some commentary about capitalism here, should we choose; after all, this is the way the marketplace works. But that isn’t an excuse, and it fails as a proper explanation because that phrasing simply reframes the problematic question in more general terms. Editors take note: Of all the corners you might cut for the sake of the business plan, general human decency is not on the list, and you cannot blame the bots.

And don’t tell me to focus on what is important. All in all, they’re all just bricks in the wall. In the societal spectrum of the rape phenomenon, this really is just a grain of something in the mortar, but damn it, it’s still toxic and it still needs to be cleaned up. On any given day, solutions to the rape phenomenon in human behavior seem impossible and inconceivable. So we take what small steps we can. And, you know, after, “Don’t rape!” it would seem that one of the steps we can take, one of those little things we can do in order to do our part for ourselves, our own, and our neighbors at large, is to regard the subject with enough general human decency to not do … well, you know … that.

Today’s just the day, you know? When faced with the actual question, it is pretty much impossible to justify minimalizing the minimalization.