The weird thing about feelgood headlines is that they often require us to feel good about someone else’s suffering. To wit, Washington Post wants us to know that “The Islamic State is failing at being a state”.

It used to be that when we taught young Americans to read, the critical thinking skills required to distill such information for oneself was intended to be part of the instruction. Perhaps it is arguable that people need the news so distilled these days, but nothing about such a notion should be comforting.

Still, though, it is a grim picture Liz Sly paints for WaPo: 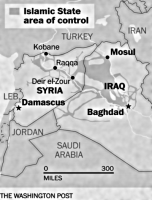 The Islamic State’s vaunted exercise in state-building appears to be crumbling as living conditions deteriorate across the territories under its control, exposing the shortcomings of a group that devotes most of its energies to fighting battles and enforcing strict rules.

Services are collapsing, prices are soaring, and medicines are scarce in towns and cities across the “caliphate” proclaimed in Iraq and Syria by the Islamic State, residents say, belying the group’s boasts that it is delivering a model form of governance for Muslims.

Slick Islamic State videos depicting functioning government offices and the distribution of aid do not match the reality of growing deprivation and disorganized, erratic leadership, the residents say. A trumpeted Islamic State currency has not materialized, nor have the passports the group promised. Schools barely function, doctors are few, and disease is on the rise.

In the Iraqi city of Mosul, the water has become undrinkable because supplies of chlorine have dried up, said a journalist living there, who spoke on the condition of anonymity to protect his safety. Hepatitis is spreading, and flour is becoming scarce, he said. “Life in the city is nearly dead, and it is as though we are living in a giant prison,” he said.

Basic Freudianism prescribes the idea that many enter certain professions, or undertake particular endeavors, as a way of sublimating otherwise unacceptable influences. Some doctors, by that outlook, become surgeons simply because they like to cut; and while this seems an utterly simplistic notion we might also try it as a springboard, because it is also clear that there exists a societal question about doctors who “play god”, which would probably be a more common sublimation than the need to slice and dice one’s fellow human being. The boxer? That part is obvious; by basic Freudianism many pugilists just like being in fights, and this is one acceptable way to spend one’s life doing just that. The police officer? Indeed, Americans are grappling with related questions in recent months, but comparatively what is happening in the Middle East is a naked, exponential caricature of any question we might ask about our own governance.

We might read the reports of fighters rounding up a hundred people for mass executions, and do we really need a headline explaining explicitly that Daa’ish is failing at statehood? Indeed, some might propose that the question itself honors bloodthirsty apostates by pretending there is a state to fail.

Daa’ish seems to be the sort of authority that can only appeal to those who suffer an elevated need for authority over other human beings. And while the differences between this sort of scourge and the troubles of civilized societies seem apparent, it must also be reminded that neither are the two phenomena unrelated; stripping away factors cultural, economic, and historical—that is, attending the basic human reality—what we see in Daa’ish is a hyperinflated version of what we fear in American society.

That is to say, Daa’ish is not an organization that is failing at governance, but, rather, one for whom the elements of statehood are generally irrelevant. Presently, it seems clear enough that one does not join Daa’ish in order to uphold law and elevate society, but, rather, as an opportunity to wallow in self-righteous cruelty toward fellow human beings.

It is never about governance when this is what it looks like. Rather, it is simply about justifying one’s own most cruel instinccts and desires.

Sly, Liz. “The Islamic State is failing at being a state”. The Washington Post. 25 December 2014.