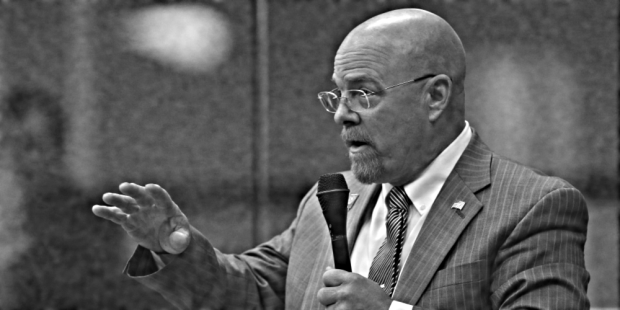 “Have you ever heard the case … of a young boy sticking his finger in his ear, getting ear wax and inserting it into a girl to test her for chlamydia?”

This one is going to take some explanation.

Actually, in truth, it is pretty much inexplicable.

Hansen has consistently voted against legislation that would have modernized the state’s sex education curriculum. But in one odd exchange with a 19-year-old mother who had become pregnant as a 15-year-old, Hansen challenged her on her understanding of sex as a sixth grader and asked her to verify a rumor brought up by a prior witness.

Here are excerpts from the exchange:

Assemblyman Hansen: “You said that when you would talk with your parents about sex, they would tell you that they would beat up if you ‘did it.’ Did you know what ‘did it’ was at that time?”

Teenage mom: “No, not exactly.”

Assemblyman Hansen: “You had no clue about what sex was in sixth grade? When your parents asked you not to do it, did you ask what ‘did it’ was?”

Teenage mom: “I knew what they were talking about, but I did not know what to expect.”

Assemblyman Hansen: “Have you ever heard the case … of a young boy sticking his finger in his ear, getting ear wax and inserting it into a girl to test her for chlamydia?”

At that point the committee chairwoman interrupted the exchange.

So this is how it goes in Nevada. It’s what the people vote for. But, yeah. You’re welcome to try to figure out that one on your own.

Hansen’s selection by Republican peers to lead the Assembly has ignited controversy. Dennis Myers offers a glimpse of the soon-to-be Speaker, and it is the sort of thing that, well, might make some people wonder what the hell is wrong with Nevada.

Hansen has said he keeps a Confederate battle flag on the wall where he writes his columns. “I fly it proudly in honor and in memory of a great cause and my brave ancestors who fought for that cause,” he wrote.

Hansen tends to use the term “Negro” and often does not capitalize it. In one column, he described Washoe Republican Sen. Maurice Washington (whom he supported) as black but in the same column called President Obama (whom he opposes) a “negro”—lower case.

Hansen has repeated, legitimately, the well known stories about Martin Luther King’s plagiarism as a student, using them to try to discredit his later work. On several occasions, including in King Day columns, Hansen has also cited as factual rumors about King’s private life about which nothing reliable is known, particularly given the efforts of the FBI to plant misinformation about King with journalists. Hansen provided nothing like chapter and verse to prove King’s private life unsuitable, relying on the notion that it is something we all “know.”

Hansen wrote, “King’s private life was trashy at best .... King Jr. is as low as it gets, a hypocrite, a liar, a phony, and a fraud.” He opposed an effort to name a Paradise Park community center for King on the grounds African-Americans had begun rejecting him in favor of Louis Farrakhan, a black trend that has not been recorded elsewhere. (Hansen offered local African-American businessperson Luther Mack as an alternative name for the center.)

And it goes on. Even before we learned the bit about earwax and chlamydia, the idea that this was the person Nevada Republicans chose as Assembly Speaker had some scratching their heads and others simply seething.

But you know, there is a reasonable solution for folks in the other forty-nine states: If you’re nonwhite, female, or gay, stay out of Nevada. Not like that’s going to happen, but, you know, people won’t change unless you hit them where it hurts, and in this case that would be the state’s tourism industry.